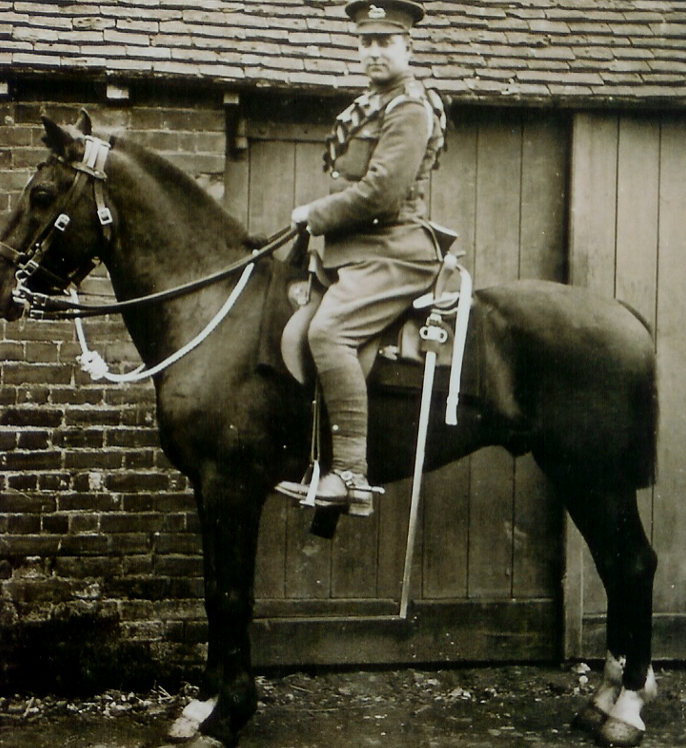 Arthur was born at the Wilson family home, Frogmore, Frogmore Lane, Bonnington, Kent on Friday 14 July 1893, and baptised in the parish church of St. Rumwold, Bonnington on Tuesday 19 September 1893, at which time his father was employed as a Agricultural Labourer.

Arthur was educated at Bonnington school as were the Miles brothers who lost their lives while serving in the army, one of whom, Herbert Walter Miles, fell, like Arthur,  on Friday 30 November 1917 during the Battle of Cambrai.

The first census on which Arthur appears, records the Wilson family as living at Holms Wood, Cottage, Bonnington. Head of the house was 44 year old Aldington native Frederick Edward Wilson who was employed as an General Labourer. By the time of the 1911 census, the family had moved to Bridge Cottages, Giggers Green Road, Aldington, where Frederick was again recorded as being the head of the house and employed as a Farm Labourer, as was 17 year old Arthur.

Arthur enlisted in the army at Shorncliffe, Kent, and initially served in the 3rd (Kings Own) Hussars prior to being transferred to the 8th (King’s Royal Irish) Hussars. The disappointment and frustration of not being able to locate his service papers was compensated, to a degree, by virtue of the fact that of all the war diary entries referring to the British army Aldington, Bonnington and Hurst Great War casualties which have been accessed by the compiler of these brief commemorations, the one written by Lieutenant George Anthony Alkinson-Willes, the Adjutant of the 8th (King’s Royal Irish) Hussars, is the best! Through this document we have a vivid picture of the battle in which Arthur lost his life. It is not only comprehensive in content regarding movements, places, etcetera, but it is also beautifully written in copper plate. Unlike most war records,  it has the number, rank and name of every other rank wounded or missing. The usual practice was for officers to be named and for other ranks to be mentioned only as numbers of wounded or killed.  The detail in these records is amazing; although none are named, all animal casualties are also recorded, showing 20 horses and 1 mule killed, 32 horses and 3 mules missing, in addition to which 21 horses are shown as wounded..

For Friday 30 November, the 8th (King’s Royal Irish) Hussars War Diary states that it was a fine day. At 9.30 am, orders were received by the Regiment to move immediately in a Northerly direction. Saddles and weapons had to be packed and a dump made. The Regiment paraded and reached the Brigade starting point by 11 am. The Brigade then trotted to Villers Faucon which was probably via Hancourt and Roisel as the War Diary does not say. It does, however, say that when they reached Villers Faucon, a rest of 30 minutes was taken before moving off again at 1.30 pm, having been given fresh orders to clear up the situation towards Gauche Wood. With C Squadron as the advance guard, the Hussars moved through the North West edge of Épehy. At the point where they passed Épehy, they were subjected to heavy machine gun fire from a position in a sunken road near Chapel Crossing and the Regiment was brought to an unwelcome and sudden stop. Just after the Squadron was stopped by the heavy machine gun fire, the first of the Hussars casualties of the day was recorded; that of Lieutenant T. C. Watson of A Squadron, wounded by enemy machine gun bullets.

The Commanding Officer then ordered Major, The Honourable Robert Nathaniel Dudley Ryder to take A Squadron on to Gauche Wood. On cresting the skyline, A Squadron came under heavy shell fire and were also swept by machine gun fire from the direction of a position at Chapel Crossing as well as from the wood. Major Ryder’s Squadron quickly manoeuvred their horses and made for a sunken road approximately 1,000 yards West of the wood, from the road, patrols were sent out on Gauche Wood. Soon the patrols were subjected to heavy machine gun fire yet again, and 34 year old Major Ryder was killed and 16 other ranks either killed or wounded.

When Second Boer War veteran Major Ryder was killed, command of A Squadron fell to Lieutenant Staniland who, with 15 men, held the sunken road position. On the right of him and his party were Indian Lancers of 9th Hodson’s Horse who were also part of the Ambala Cavalry Brigade having been stationed there prior to hostilities. At approximately 3 pm, the German’s launched a heavy counter-attack from where they had been concealed in Gauche Wood. When their attack began, it soon became clear to the Lieutenant and his Hussar/Lancer force he then commanded, that the enemy was far greater in strength at the Gauche Wood positions than had been envisaged. British and Indian Cavalrymen fighting as Infantrymen certainly gave a good account of themselves when waves of enemy infantry tried to press home their attack. As time went by it became noticeable how one-sided the casualties were. Although vastly numerically superior, the losses were also far larger amongst the Germans. The longer the fighting continued, the heavier enemy losses became, to such an extent that to the relief (and probable surprise of the dismounted Cavalrymen), the enemy attack was abandoned at the sunken road. 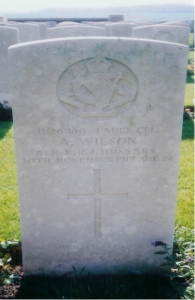 Gauche Wood at the Nord commune of Villers-Guislain where Arthur lost his life can be seen on the skyline of the photograph of his headstone, the bottom of which has the inscription HONOURED, BELOVED, LAMENTED REST IN PEACE and that was chosen and paid for by his grieving parents.