Alec was born in the village of Arpinge near Folkestone, Kent on Tuesday 27 January 1914, at which time his father was employed as a Lime Carter.

Prior to enlisting in the army, Alec was employed at Orpins Stores, Lees Road, Brabourne Lees. His army service number indicates that he had originally served in The Buffs (Royal East Kent Regiment). Unfortunately due to the fact that members of the public are still unable to access the service records of British armed forces personnel, for a long time it was impossible for the compiler to ascertain when Alec transferred from The Buffs (Royal East Kent Regiment), or into which regiment or corps.

Having obtained a photograph of Alec’s headstone, further progress was proving to be frustrating for the compiler and Alec,  initially proved the most difficult of the original six Second World War casualties commemorated in Aldington to research, beyond the fond memories of several parishioners.

By chance, Ex Royal Navy Petty Officer,  Second World War veteran and former Aldington Postman the late Geoff Peace, sent a copy of the Aldington Church and Village News, along with other publications that contained crosswords to Alec’s sister Mrs Amy Taylor.  The parish magazine was a means that was used by the compiler to request information from relatives of the casualties being researched and, in addition to completing the crossword, Mrs. Taylor also read the rest of the magazine and saw the compiler’s request for information. Mrs. Taylor not only provided the photograph above of Alec, but also provided valuable information about his military service.

On Wednesday 11 August 1943, German forces commenced a successful six day evacuation of Sicily, having been beaten back by the Allies who invaded the island on Saturday 10 July 1943.  Following the successful conclusion of the north African campaign in mid May, a combined allied force of 160,000 Commonwealth and American troops invaded Sicily as a prelude to the assault on mainland Italy. At the time of Alec losing his life, he was numbered among those forming the Sicily garrison.

On Sunday 9 April 1944, Alec was working as lineman and was up a telephone pole when as far as can be ascertained, Signalman,1426097 William Joseph Higginson from Manchester, Lancashire of the 1st Divisional Signals, Royal Corps of Signals stepped on a landmine located at or very near the base of the telephone pole. 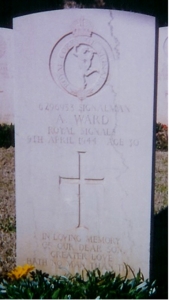 Alec and William were both killed when the landmine was detonated and lie at rest in close proximity with one another in the Syracuse War Cemetery.  The bottom of Alec’s headstone has the following inscription which was  chosen by his parents.

IN LOVING MEMORY OF OUR DEAR SON, GREATER LOVE HATH NO MAN THAN THIS.