Commemorated on the Lympne, Kent civic war memorial and at Trinity College, Cambridge, also at Eton College, and on a memorial plaque on pew “N” left seat 8 in the Guards Chapel, Birdcage Walk, Westminster, London, S.W.1E. The latter form of William’s remembrance says:-

William was born at Clerkenwell, Middlesex on Wednesday 22 October 1884. He was educated at St. Michael’s Westgate-on-Sea, Kent, Eton College, Berkshire and Trinity College, Cambridge. He was recorded as having been a fine athlete at Eton. William was articled to Chartered Accountant Sir William Plender (later 1st Baron Plender, G.B.E., J.P., D.L. of Sundridge, Kent). 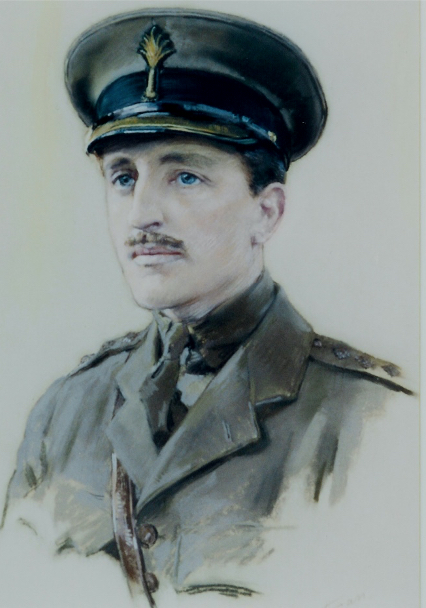 On Thursday 16 December 1915, after completion of his officer training course at the Royal Military Academy, Sandhurst, William was commissioned as a Second Lieutenant in the Welsh Guards, and was posted to the 2nd (Reserve) Battalion at the Tower of London where he remained until being transferred to the 1st Battalion, Welsh Guards on Sunday 24 September 1916. On Friday 29 September 1916 he joined the battalion in the field, and was assigned to No.4 Company which he subsequently commanded. He was later assigned to the Prince of Wales Company which he command following a promotion.

In 1917 William was wounded and evacuated back to England, and on Friday 21 September 1917 he purchased a 1854 pattern officers sword from the Wilkinson Sword Company which was etched with a GVR cypher, Welsh Leek and the motto Cymru am byth. The latter means Wales forever.

On the completion of his medical treatment and convalescence he returned to the Front in May 1918. William was commanding the Prince of Wales Company, 1st Battalion, Welsh Guards when he was killed in action by enemy machine gun fire near the commune of Saint-Léger, Pas de Calais, France on Saturday 24 August 1918. The following is a brief extract from the History of the Welsh Guards, which was written by Major G. H. Dudley Ward, D.S.O., M.C. and published in 1920.

“Later in the afternoon I relieved Paton in the left of the line. The trench was very shallow, barely two feet deep, with deep slits in the bays, but very trying to work along, for it was swept with machine-gun fire, and Upjohn had been killed in trying to get along it to No.3 Company H.Q.” Another brief extract in the book says; “Poor Upjohn was a very gallant fellow, with supreme contempt for the enemy.”

When the compiler of these brief commemorations had read various accounts about Williams’ service in the Great War, he was left wondering why William had not been decorated for gallantry, more so as the compiler has had a lifelong interest in orders, decorations and medals, albeit with the passage of time sometimes cynically left wondering the reason why some recipients of military or civilian awards were awarded them, with some having clearly the right connections.

Contact was made with Williams’ only child, Clive, in the early 1970s and Clive and his wife Anna, who lived at Belford, Northumberland, visited the compiler in Aldington and subsequently kept in regular touch until shortly prior to Clive’s death at the age of 96 in 2011. At the time of Clive’s visit and on a number of occasions subsequently, the compiler talked to Clive about his father. The heritage of Williams’ unusual second Christian name Moon was the subject of one conversation. As suspected,  Moon was a family name that had been passed down, though the compiler was proved completely wrong when Clive explained that during the early career of Williams’ own father as a Solicitor, he had been encouraged and helped a lot by a Barrister with the surname Moon, and had thus, in appreciation, named his first son William Moon Upjohn.

Due to the fact that Clive’s father had served as a Captain in the Welsh Guards during the Great War, and Williams’ younger brother Baron, Gerald Ritchie Upjohn, P.C., C.B.E., D.L. had served as an officer in the regiment during the Second World War, prior to being promoted to the rank of the rank of Colonel in 1943 and subsequently to a Brigadier, the compiler tentatively asked Clive if he had served in the Second World War, fully expecting to learn that he too had served either as an officer in the Welsh Guards, or in the Royal Army Medical Corps, and was somewhat surprised to learn that in fact Clive had served as a Lieutenant in the Royal Naval Volunteer Reserve.

Via Clive it was also learned that his father had been a well-known equestrian, and the thought occurred to the compiler that had William served in the 1/1st, 2/1st or 3/1st Welsh Horse Yeomanry as opposed to the Welsh Guards, he would probably have survived the Great War as the total casualty roll of the Welsh Horse Yeomanry was 10 officers and 21 other ranks.

On the Great War memorial plaques in St. Martin’s church, Aldington and in the chapel, William is incorrectly commemorated as a 1st Lieutenant, when in fact  he had been promoted to Acting Captain in 1917, as is shown in the portrait above. 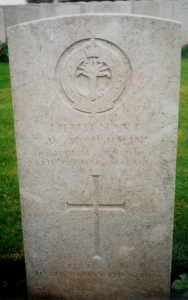 Lympne Place was the country home of Williams’ parents, and is probably the reason why he is commemorated on Lympne civic war memorial.  Clive was unable to explain why his father is commemorated in the two places of worship in Aldington.

The bottom of Williams’ headstone has the following inscription which was chosen and paid for by his widow. GREATER LOVE HATH NO MAN THAN THIS

Thanks are due to Williams’ son, the late Dr. Clive Henry Critchett Upjohn, M.D., M.A., M.Chir., L.R.C.P., M.R.C.S. for providing the picture of his father William, for use as the compiler deemed appropriate, and to Seamus H. Scullion for providing the photograph of William’ headstone at Ligny-Thilloy, France.