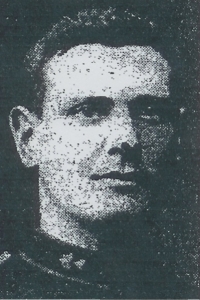 Frank was born at Peacock, Hurst, near Aldington on Saturday 28 May 1892, and christened at the parish church of St. Martin, Aldington on Sunday 26 June 1892. The first census on which Frank was recorded was that of 1901 when the Terry family lived at Hungry Hall, Aldington. Head of the house was 44 year old Lydd native Edward William Terry, who was recorded as being employed as a Labourer in one of the Kent ragstone quarries in the village of Aldington. By the time of the 1911 census, Franks’ parents had moved to Aldington Frith and Edward was recorded as being employed as a Highway Roadman, at which time all of the surviving Terry children had left home. Frank was living as a boarder not far from his parents,  at Stone Cross, Bilsington, and was employed as a Groom. Head of the house was 32 year old Eastchurch, Isle of Sheppey, Kent native William Brooks who was employed as a Platelayer by the South Eastern & Chatham Railway Company.

Frank enlisted in the army at Maidstone as a regular soldier in 1912. In 1917 he volunteered for active service, having completed almost five years service, four years of which had been spent in Ceylon (now Sri Lanka). This resulted in his return to England on Sunday 29 July 1917. In September he spent a short leave with members of his family at Aldington, before leaving for the Western Front on Saturday 29 September. During the Battle of Passchendaele (Third Battle of Ypres), Frank was wounded severely in his chest by a enemy shell fragment on Sunday 7 October and, despite the best efforts of medical staff, succumbed to his wounds whilst receiving treatment at the 61st Casualty Clearing Station, Dozinghem on Thursday 25 October 1917.

The Terry family has a justifiably proud record of service to the country; when Frank died, his brother Edward was a Chief Petty Officer with 27 years service in the Royal Navy where another brother, John, also served for 25 years. Another brother ,Walter, served, like Frank, in the Royal Garrison Artillery and was a Sergeant with 14 years service, whilst another, Charles, was wounded whilst serving in the Queen’s Own (Royal West Kent Regiment)  and another, George, serving in the Middlesex Regiment, was in hospital at Salonika at the time Franks’ death.

By the time that the somewhat complex pension was agreed for Franks’ immediate dependants, his parents had moved from Aldington and were living at 26 Bartholomew Street, Hythe, where his father Edward died on Friday 1 August 1919, and was where his mother was living when she became one of the recipients to benefit from Frank’s pension.

Dozinghem Military Cemetery, where Frank is at rest, is located to the north-west of Poperinge near Krombeke. West-Vlaanderen was outside the front held by Commonwealth forces in Belgium during the Great War, but in July 1917, in readiness for the forthcoming offensive, groups of casualty clearing stations were placed at three positions called by the troops Mendinghem, Dozinghem and Bandaghem.

The 4th, 47th and 61st Casualty Clearing Stations were posted at Dozinghem and the military cemetery was used by them until early in 1918. There are now 3,174 Commonwealth burials of the Great War in the cemetery and 65 German war graves from this period. The cemetery also contains 73 Second World War burials dating from the Allied withdrawal to Dunkirk in May 1940. The cemetery was designed by Sir Reginald Theodore Blomfield, R.A., assisted by Noel Ackroyd Rew who had served as a Lieutenant the Royal Engineers from 1915 until 1919. In view of Franks’ connections with the village of Aldington, it would clearly be remiss not to mention the here that although Sir Reginald Theodore Blomfield was born at Bow Vicarage, Devon, he was brought up in Kent, where his father, the Reverend George John Blomfield was rector of Dartford in 1857 and then of Aldington in 1868. The Reverend Blomfield and his wife Isabella are both at rest in St. Martin’s Churchyard, Aldington.