From when the compiler of these brief commemorations started gleaning a lot of information in the 1950s about the local fallen, by far and away the man whose non commemoration in Aldington caused greatest concern to parishioners’ was Edward. His widow had been active in helping the British Legion, and his son Horace Edward Spenceley who was born in Sturry on Tuesday 8 September 1914, who had attended Aldington village school and served in the R.A.F. during the Second World War, was for many years still in contact with many people in Aldington.

Edward Spenceley was born at New Brompton, Gillingham, Kent in 1884, and he was the eldest child of Horace William Spenceley and Elizabeth Harriett Spenceley (née Slater) of 22 Canterbury Street, Gillingham.

In 1901 the Spenceley family were living at 43 Park Road, New Brompton, Gillingham where Horace William Spenceley, 47, was employed as Road Labourer, and Edward was recorded as 16 years old and working for the District Council as a Labourer.

Edward enlisted in the army as a regular soldier at Chatham. Signing up on Wednesday 24 January 1906 for 7 years service with the Colours and 5 years in the Reserve. When he enlisted, Edward stated that he was 20 years and 9 months old, born at Gillingham, Kent, and employed as a Labourer. He also stated that he was a serving member of the 3rd Battalion, Queen’s Own (Royal West Kent Regiment) (Volunteers). He named his father, Horace, as being his next of kin. In response to being asked inwhich regiment or corps he wished to serve,  he replied Corps of Dragoons of the Line, and on the completion of the requisite enrolment requirements was attested to serve in the 7th Dragoon Guards (Princess Royal’s).

Edward joined his regiment at the Cavalry Barracks, Canterbury on Friday 26 January 1906. Whilst stationed at Canterbury, he was awarded his 3rd Class Army Education Certificate on Thursday 2 May 1907. On Friday 24 January 1908 he was awarded a Good Conduct Badge and Class 2 Service Pay and appointed a Corporal with effect from Saturday 25 July 1908. A bit of bother on Tuesday 3 November 1908 resulted in him being demoted to Private again. Whilst stationed at Trimulgherry, Secunderabad, India, he was awarded his 2nd Class Army Education Certificate on Friday 19 April 1912 and on Monday 17 February 1913, signed a document agreeing to be transferred to serve in the Army Reserve at any time following his return to the United Kingdom.

At the time of his discharge on Wednesday 19 March 1913, Edward had been the recipient of two Good Conduct Badges, with his military character and conduct being assessed as being Very Good. During this period of service as a regular soldier, Edward had served for 3 years as a Regimental Signaller having previously been examined and passed as a 1st Class Signaller.

Edward married 27 year old Fordwich, Canterbury native Miss Milly Susannah Blanche Kennett in the parish church of St. Barnabas, Nelson Road, Gillingham on Sunday 23 November 1913 by the Reverend Henry Colborn. Edward spent only a short time as a civilian, however, as on Wednesday 5 August 1914 he was recalled for service with the Colours of the 7th Dragoon Guards (Princess Royal’s) and mobilised.

Edward served on the Western Front with the British Expeditionary Force from Thursday 8 October 1914, attached to the Household Cavalry Composite Regiment.

There is conflicting documentation appertaining to Edwards’ death; it being recorded that he was accidentally shot by another soldier, that he accidentally shot himself, and that he committed suicide during temporary insanity whilst on active service. Having undertaken extensive research, the compiler is of the opinion that the latter cause of death was highly unlikely. 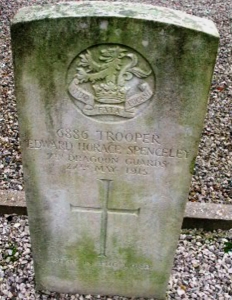 On Monday 4 August 1919, Edwards’ widow signed a copy of Army Form W.5080 in order for her to be sent a bronze memorial plaque (aka Dead Man’s Penny) and accompanying certificate. The form was witness by the Reverend William Eastgate Middleton Nunn, M.A, Rector of Aldington from 1898. On Saturday 6 September 1919, the 1914 Star, to which Edward would have been entitled, was sent to his widow, who was also sent his Allied Victory Medal on Thursday 10 March 1921, also received his British War Medal, thought he date of receipt is unknown.

For a number of years Milly Spenceley and her son Horace lived at Howarths, Dicksons Bourne, Aldington, where she was the Housekeeper for Machine Gun Corps veteran Edward Jarvis.