Son of James Southern of the Forstal, Preston-next-Wingham, Canterbury, Kent and of the late Mary Jane Southern (née Jones).

Commemorated in The Buffs Book of Life in the Warriors Chapel, Canterbury Cathedral, Kent.

Alfred was born in Aldington on Saturday 13 February 1875, and was christened in Mersham on Sunday 7 March 1880.

On some data sources Alfred has been recorded by the use of his second christian name Richard, which made for interesting researches appertaining to his life and death. It was as 16 year old Aldington native Richard Southern that Alfred was recorded by the enumerator in the 1891 census. The Southern family were living at Ivy Cottage, Monkton, Isle of Thanet, Kent and head of the house was 42 year old James Southern who was employed as an Agricultural Labourer as was ‘Richard.’

Alfred originally enlisted in the army as a regular soldier in Canterbury on Saturday 11 June 1892, signing up for 7 years service with the Colours and 5 years in the Army Reserve. At the time of enlisting, Alfred was living at Monkton, Isle of Thanet, Kent which was probably at Ivy Cottage, and stated that he was born at Aldington, Ashford, Kent, that he was 18 years old, (as opposed to his correct age of 17) and that he was employed as a Labourer. It would seem highly likely that the error made by Alfred when stating his age was a deliberate untruth, if for no other reason than it would have initially affected his terms of service and a difference in the amount of weekly pay that Alfred would have received.

In response to being asked the question “Have you ever been sentenced to Imprisonment by the Civic Power,” Alfred replied “yes” and said that he had served a 14 day sentence due to the non payment of fines. On being asked if he had a preference regarding which regiment or corps he served in, he replied the Rifle Brigade to which he was attested. Alfred reported for duty at the Regimental Depot of the Rifle Brigade at Winchester, Hampshire on Monday 13 June 1892, where he was attested as Rifleman, 2387. On Wednesday 19 October 1892 he was posted to the 2nd Battalion of his regiment, and spent the majority of his 12 years serving in the Rifle Brigade as a member of the 2nd Battalion. During his time serving in the battalion his original terms of enlistment were amended(on Friday1 April 1898) in order for him to complete additional service with the Colours. He was awarded his first Good Conduct Badge and additional pay on Monday 11 June 1894, and his second Good Conduct Badge and additional pay on Monday 11 February 1901. On Wednesday 20 August 1902, he was posted to the Regimental Depot of the Rifle Brigade at Winchester, which is where he was still stationed when being transferred to Section B, 1st Class of the Army Reserve on Thursday 26 February 1903. He was discharged from the army at the completion of his engagement on Friday 10 June 1904.

During his time serving in the 2nd Battalion, Rifle Brigade in addition to service at home, On Thursday 23 September 1897 Alfred was in the 2nd Battalion, Rifle Brigade when it left Aldershot, Hampshire for the Royal Albert Docks at Woolwich, where it embarked on the 5,183 ton SS Avoca for service at Malta. The battalion disembarked at Malta on Sunday 3 October. While stationed at Malta, Alfred’s battalion was quartered at Isola Gate Barracks, San Francesco de Paola Barracks, St. John’s Cavalier Vittoriosa and Polverista Barracks, all on the Cottonera side of the Grand Harbour. On Tuesday 12 July 1898, the battalion left Verdala Barracks and embarked for Egypt on board the 5,194 ton SS Nubia. The battalion disembarked at the port of Alexandria on Saturday 16 July and served in Egypt for 10 weeks, during which time it taken part in the Nile Expedition.

Alfred’s battalion consisted of 737 personnel when it left Alexandria for Crete on Thursday 22 September 1898 after fighting in the Nile Campaign. The battalion served during the occupation of Crete, and sailed from Crete for Natal, South Africa on board the 5,186 transport ship SS Jelunga on Monday 2 October 1899, in order  to fight in the Second Boer War, which was fought from Wednesday 11 October 1899 until Saturday 31 May 1902, and the SS Jelunga docked at Durban on Thursday 26 October. A month after the cessation of hostilities, the 2nd Battalion, Rifle Brigade was comprised of 990 officers and other ranks when it left Port Natal, South Africa on the SS Malta in September 1902 for a new posting in Egypt.

For his time spent on active service, Alfred was awarded the Queens Sudan Medal 1898, and the Khedive’s Sudan Medal. He was awarded the Egypt Medal 1882-1889 with clasp for Khartoum, and The Khedive’s Star. For his service during the Second Boer War, Alfred received the Queens South Africa Medal with the four clasps; Belfast, Relief of Ladysmith, Tugela Heights, Laing’s Nek. He was also awarded the Kings South Africa Medal with the date clasp 1901 & 1902.

At the time of the 1911 census, Alfred was recorded as being a 35 year old Boarder at 16 Fairlight Glen, College Road, Margate, Isle of Thanet, Kent, and was employed as a Labourer on Public Works. Head of the house was 27 year old Sandwich, Kent native Daniel Quested Drayson who was employed as a General Labourer.

Having completed his service with the Colours and in the Army Reserve seven years earlier, Alfred re-enlisted for 4 years army service at Canterbury, Kent on Monday 11 December 1911 as a member of the Army Reserve (Special Reservists).

When he re-enlisted, Alfred again stated that he was born at Aldington, Ashford, Kent, that he was 37 years and 10 months old and was employed as a General Labourer. He also stated that he had previously served in the Rifle Brigade until the termination of his Period of Engagement. He was attested to serve as Private, S/10394 in the 3rd (Reserve) Battalion, The Buffs East Kent Regiment). During the Great War the battalion in which Alfred served was stationed at The Citadel, Western Heights, Dover, Kent. Having served for 2 years and 72 days in the same battalion, Alfred died in the Military Hospital, Western Heights, Dover, Kent on Saturday 20 February 1915 of a Cerebral Haemorrhage, it being earlier the same day that he was admitted to the hospital as a patient. 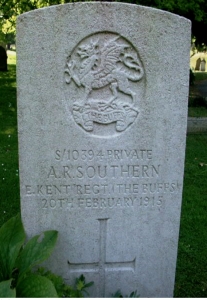 Unlike the majority of the 50 victims of the two world wars who are commemorated on the Aldington, Bonnington & Hurst civic war memorial, it is somewhat ironic that Alfred’s death was not due to any form of military action, but as can be seen above he had survived many battles during the years he spent serving as a Rifleman in the Second Battalion, Rifle Brigade.