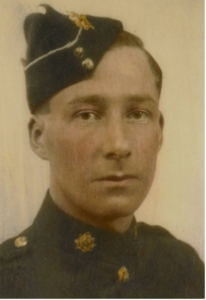 Bernard was born at the Good Intent, Aldington on Thursday 17 January 1918, where his grandfather Thomas Sloman was the Licensee, and where his mother, Millicent, was employed as a Barmaid. The late Mrs. Gladys Sloman, who kindly provided the compiler with the photograph of Bernard shown above, said that prior to enlisting in the army, Bernard had a number of jobs, including being an excavator and dragline operator at a beach quarry on the outskirts of New Romney for quite a long time.

Bernard was part the military Operation Market Garden, which was fought with overwhelming odds in favour of the Germans from Sunday 17 until Monday 25 September 1944, by British and Polish airborne forces at Arnhem in Holland.

Market Garden consisted of two sub-operations, Market being an airborne assault to seize key bridges, and Garden a ground attack moving over the seized bridges. Bernard lost his life during the Garden part of the operation which was fought from Eindhoven via Nijmegen to Arnhem. Tragically, neither the airborne assaults ground assault on the route to Arnhem went to plan, resulting in troops who were to support and relieve the airborne force being delayed with catastrophic results. Valkenswaard, where Bernard is now at rest, was the first village to be liberated on the main line of the British advance into Holland in September 1944. The cemetery, which lies in a pinewood, contains in excess of 220 graves of which 217 are identified casualties, almost all of them are those of men who fell in the fighting in the woods around Valkenswaard during that month. All the men buried here are British.

Due to fighting earlier in the day, the British troops did not arrive at Valkenswaard until 1930 hours on Sunday 17 September, and a decision was made to spend the night there. Valkenswaard had suffered heavy shelling and many civilian deaths. Nevertheless, the liberators were greeted with great enthusiasm. It has never really been made clear why the advance did not continue on to Eindhoven. Perhaps it was thought the troops deserved a rest after the battle earlier in the day. Or it was considered too risky to continue to advance in the dark. Subsequently, it transpired that the delay spent at the village of Valkenswaard had a major negative impact on the course of Operation Market Garden. 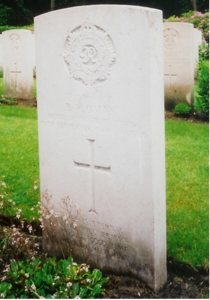 Bernard is numbered among the three members of the Royal Army Service Corps who are now at rest at Valkenswaard War Cemetery, that all died on the same day, the other two were Driver, T/10668575 Robert Briggs Mitton, the 36 year old son of Albert and Polly Mitton; and the husband of Gladys Doreen Mitton, and is buried in the grave adjacent to that of Bernard. 20 year old Driver, T/14552612 Douglas George Wragg who was the son of Harry Wragg and Edith Florence Wragg of Withington, Herefordshire is at rest in grave I. B. 4. Bernard Sloman, Robert Mitton and Douglas Wragg were all originally buried at Eindhoven, and as such it is probably reasonable to assume it was near to where they died. Their graves were moved from Eindhoven to Valkenswaard War Cemetery on Thursday 18 May 1945.

The bottom of Bernard’s headstone at Valkenswaard War Cemetery has the following inscription which was chosen by his mother:

LIFE IS ETERNAL, LOVE WILL REMAIN

IN GOD’S GOOD TIME WE SHALL MEET AGAIN

Bernard’s grave is the one on the extreme right of the front row shown above. The photograph and that of his headstone were both taken by Adelaide Hughes