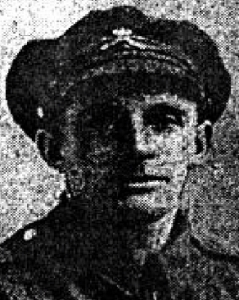 Although a descendant of several Aldington natives and residents, Edward was born in Willesborough,  on Friday 15 January 1886. When the 1891 census was taken, however, he and his family lived at the Corner Shop (later Newman’s), Roman Road, Aldington. Head of the house was 40 year old Ashford, native James Rayner who was recorded by the enumerator as being a Shopkeeper & Farmer, in addition to which James was also the sub-postmaster of the village Post & Money Order Office, which at the time was also the Annuity & Insurance Office. Edward was recorded as being a 5 year old Scholar and pupil at Aldington School.

By the time of the 1901 census the Rayner family had moved to 9 Wellesley Villas, Wellesley Road, Ashford, Kent, where Grocer & Employer James Rayner was again recorded as being the head of the house, and Edward was a 15 year old Schoolboy, at which time he was a pupil at Ashford Grammar School for Boys, which he attended from 1898 until 1903. Edward played cricket for the school in 1901, 1902 and 1903.

On the completion of his education at Ashford Grammar School for Boys, Edward studied Agriculture at Wye College, but at the time of the 1911 census, Edward was recorded as being a Assistant in Business at  9 Wellesley Villas, Wellesley Road, Ashford, Kent.

Edward enlisted in the army at Ashford on Saturday 11 December 1915 ‘For The Duration Of The War, with the Colours and in the Army Reserve.’ When he enlisted, he stated that he was 29 years old, a Grazier and named his father James Rayner of 9 Wellesley Villas, Wellesley Road, Ashford, Kent as his next of kin. He was placed on the Army Reserve until being mobilised on Wednesday 1 March 1916, and attested to serve in The Buffs, (East Kent Regiment). He reported for duty with the 3rd (Reserve) Battalion at the Citadel, Western Heights, Dover, Kent where he was attested to serve in the regiment as Private, 9409.

Prior to the completion of his training at Dover, Edward volunteered to serve in the Machine Gun Corps, to which he was transferred on Friday 12 May 1916, and was trained at the M.G.C. depot and training centre at Belton Park Grantham, Lincolnshire. On the completion of his training at Grantham, Edward sailed from Folkestone on Sunday 9 July 1916, arriving at the French port of Boulogne later the same day. He joined the M.G.C. Base Depot at the village of Camiers, Pas de Calais, on Tuesday 11 July 1916. In France, Edward served in a number of units of the Machine Gun Corps prior to his death, the changes made were as the direct result of a number of injuries he suffered.

He was posted to serve in 189 Company, Machine Gun Corps (Infantry) on Saturday 1 September 1917, and was still serving in 189 Company when Edward was appointed a (unpaid) Lance Corporal on Friday 1 February 1918. Unfortunately it has not been possible for the compiler of these brief commemorations to ascertain the date of Edwards’ posting to the 63rd Battalion, Machine Gun Corps (Infantry) or reason why etcetera.

Reading the battalion war diary first entry on the day that Edward died, it would appear that his unit was in an area to the east of the Pas de Calais village of Bertincourt, probably south of the D7 road and north of where the A2-E19 motorway now runs. Officers and other ranks in Edwards’ battalion were aware of the intention of the enemy to make an attack on that day, but the scale of what was to come may not have been anticipated; it reads:- “Information had been received from prisoners captured recently, that an attack was expected to take place on the 21st this was only one of many such reports, and the Battalion was fully prepared to meet such a contingency.” The diary entry written at 0330 hours is a casualty report up until noon, and is as follows:- Left & Centre NIL, Right Group 3, (1 killed).” Further reading of the war diary makes no mention of any additional casualties on the day Edward lost his life, the next day reference is made to the wounding and capture of a Second Lieutenant Sanderson and a Second Lieutenant Henson being wounded but remaining on duty, plus 2 other ranks being wounded. From reading these diary entries even allowing for “late entries” regarding casualties it would seem virtually certain that the unnamed man who was killed in the Right Group on Thursday 21 March 1918 was Edward, with the distinct possibility that the two men wounded were members of his gun team.

In view of the fact that Edward was a Lance Corporal it is quite likely that he was the man in charge of the guns 6 man team when using the Vickers machine gun in action. Each of the crew had a specific job when manning their gun. As his gun teams number one, Edward would have been the man who fired it, he also carried the tripod (weighing 48.5 pounds) for the gun, his number two fed the 250 round belts into the gun, and carried the weapon, number three supplied the ammunition to the pair firing the gun, the other gun crew members acted as observers etcetera, but in view of the high casualty rate amongst M.G.C. gun crews, probably all would have been trained to do each others jobs, either away from the front or “on the job,” in that way allowing for woundings and fatalities.

It was with good reason that soldiers of other regiments and corps of the British and allied armies during the Great War, gave the Machine Gun Corps the nickname ‘The Suicide Club,’ it being a reflection of the high casualty rate it suffered.

On Tuesday 3 June 1919, James Rayner completed a copy of Army Form W.5080 in order to sent a bronze memorial plaque (aka Dead Man’s Penny) and accompanying certificate in memory of Edward. The form was witnessed by Kent Justice of the Peace, Herbert Lee, J.P. of 22 High Street, Ashford, Kent.