Commemorated on the Chatham Naval Memorial. Panel 24 and as G. PLAYFORD in the former Wesleyan Chapel, Mersham.

William, who was known by all and sundry as George, was born at Priory Road, Bilsington, Kent on Friday 30 March 1894, and his birth recorded in the East Ashford, Kent Registration District during the second quarter of 1894.

The first census on which William was recorded was that of 1901 when the Playford family lived at Aldington Frith. Head of the house was 33 year old Aldington native Javan Playford who was recorded as being a Stone Quarryman, which doubtless means he was employed quarrying Kent Ragstone in Aldington. The enumerator recorded William as George. At the time of the 1911 census, he was recorded as William and was employed as a Market Gardener Assistant living at Kingsford Street, Mersham. Head of the house was his employer 63 year old Mersham native James Chittenden, who was a Market Gardener.

William worked for James Chittenden for two and a half years until his on Tuesday 4 March 1913, after which William was employed as a Cowman and stated same when he joined the Royal Navy at Chatham, Kent for 12 years on Monday 13 October 1913. He initially served at the Chatham naval barracks, H.M.S. Pembroke, as a Stoker 2nd Class and was allotted his service number CK/21054. 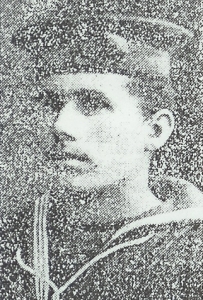 As a Stoker 2nd Class, on Friday 20 March 1914 William joined the crew of the 12,950 ton battleship H.M.S. Vengeance. His rating was raised to that of Stoker 1st Class on Tuesday 13 October 1914 and he served on H.M.S. Vengeance until Thursday 29 July 1915.  He then transferred to H.M.S. Vivid II which was the Stokers and Engine Room Artificers School in Devonport, Devon. On the completion of his time here, William rejoined H.M.S. Vengeance on Thursday16 December 1915.

While he was serving on H.M.S. Vengeance, William submitted a application via the Captain to be considered a suitable candidate for the submarine service. His application was successful and he was posted to the submarine depot ship H.M.S. Dolphin, where, on Sunday 1 April 1917, William joined the crew of H.M. Submarine “C34.”

The C34, on which William was serving when he lost his life, had been built at Chatham Dockyard.  Her keel was laid down on Monday 29 March 1909, she launched on Wednesday 8 June 1910 and was commissioned on Saturday 17 September 1910. As a C Class, she had a displacement of 290 tons when on the surface, 320 tons submerged and carried 4 torpedoes. As a Stoker aboard the submarine, William’s main duty would have been to attend to the Vickers 12 cylinder horizontal petrol engine which produced 600 bhp. In peacetime, as a C Class submarine the C34  would have had a crew of 2 officers and 14 ratings. During the Great War all C Class submarines carried an additional rating making a crew 17 in total, but on the last patrol of the C34, she carried a total of 19 officers and ratings. From Tuesday 25 November 1913 until she was lost on Saturday 21 July 1917, the C34 had 5 commanders who had very mixed fortunes with submarines.

It had been decided by the Admiralty to base two C Class submarines on anti-submarine patrol between the Orkney and Shetland Islands. Following that decision, two C Class submarines were sent from Scapa Flow to patrol between the two groups of islands – they were the C19 and C34, both of which sailed the Medea at 1900 hours on Monday 16 July 1917. The C34 was instructed to give special attention to convoys going into or leaving Lerwick proceeding North and South.

On Saturday 21 July at 1313 hours off the coast of Fair Isle, Shetland Islands, the C34, with her tanks partially flooded was stopped on the surface at a position approximately 59  30’N 0 5’W. It was whilst the C34 was stopped in broad daylight that she was at her most vulnerable to enemy attack. Unfortunately the C34 was spotted via the periscope of the commander of the German submarine U-52, which was commanded by Kapitänleutnant Hans Walther from Tuesday 8 May 1916 until Tuesday 18 September 1917.

Manoeuvring the U-52 into a favourable position to attack the C34, Hans Walther hoped to destroy Williams’ submarine with just one torpedo as he had already used up several on his current patrol having sunk four ships prior to the attack on the C34, so needed to conserve his torpedoes. At 14.46hrs, a torpedo was fired and seconds later the C34  sank in a cloud of smoke and flames.

To the German submariner’s credit, after he sank the C34, he sailed close to the point to see if anyone had survived the explosion. A crew member spotted a British sailor in the water, covered in oil, and was hauled aboard the U-52. On being rescued, the sole survivor of the C34, Stoker 1st Class, K/22307 Frank Scoble is alleged to have told his captors “You have won the game” which the Germans thought was a typically English expression.

Kapitänleutnant Hans Walther rose to the rank of Konteradmiral in the German Navy and, having survived both world wars, he died on Wednesday 4 January 1950.

In 1987, having gleaned quite a lot of information about William, including the circumstances about his death etcetera, the compiler asked Aldington resident the late Albert Playford if he had, or knew of somebody in the family or anybody else who had a photograph of William. Unfortunately,  Albert did not, but added that when he was quite young he had gone with his father John to see Williams’ commemoration on the Chatham Naval Memorial, accompanied by Albert’s brother Jack.  Albert then told the compiler that the family thought Williams’ death had occurred in the Atlantic Ocean.  Upon being told that it was in the Shetlands off Fair Isle that the submarine was sunk, not only was Albert clearly surprised, but instantly commented what a shame that the detail came just too late to for the family, as his father had died the previous year.