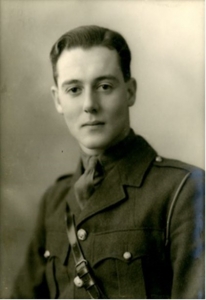 As part of the British Expeditionary Force, the 2nd Battalion, The Buffs (Royal East Kent Regiment) in which Denis serving, was amongst the first contingent to leave for France in September 1939. This period is now known as the ”phoney war”. It lasted from September 1939 to May 1940 when, apart from a few brief skirmishes, both sides were content to remain behind their defences, contrasting with the German blitzkrieg (‘lightning war’) tactics from the Polish campaign which followed. Denis’ battalion along with all of the other units of the B.E.F. were subsequently subjected to the blitzkrieg tactics of the enemy.

By the end of the first week of May 1940, Denis’ battalion was travelling across countryside over which part of the Great War had been fought, and passed many war cemeteries that held large amounts of the British fallen from that time. The sight of those cemeteries, some very large, must have been somewhat disconcerting for the allied troops as they passed by them, having moved from their defensive line and into Belgium as part of an attempt to stop or, at least, slow down the German advance. The move made by the 2nd Battalion, The Buffs (Royal East Kent Regiment) was part of the ‘Dyle Plan’ which was to form a defensive line along the Mause and Dyle rivers.

On Monday 20 May, the 2nd Battalion, The Buffs (Royal East Kent Regiment) made an heroic stand at Petegem, against a vastly numerically superior attacking German force.  Dennis was badly wounded at C Company Headquarters. He was treated for his wounds at the Regimental Aid Post, receiving Morphine injections in order to ease his pain.

Of operational necessity,Denis was left behind when his battalion was subsequently ordered to withdraw. At the time of his death, his battalion was part of the rear guard formations engaging the enemy in order for the majority of the B.E.F. to undertake a fighting withdrawal towards the channel ports.

All of those buried in Esquelmes War Cemetery, where Dennis is at rest, died in defending the line of the River Scheldt; the Germans attempted to cross the river near Esquelmes during the morning of Tuesday 21 May 1940, but were repulsed after heavy fighting. They eventually crossed the river on Thursday 23 May, when the British Expeditionary Force withdrew to the Gort Line. Casualties buried in various places in the neighbourhood were brought to Esquelmes by the Belgian authorities in September 1940.

At the time of Denis’ death his home address was recorded as being at Knoll Farm, Aldington, Ashford, Kent which is where he had lived with his parents. The property, like many in the locality, was requisitioned for military use during the Second World War. Denis’ father, Major Algernon George Pearson, D.S.O., had been a heroic soldier during the Great War. Joining the Royal Berkshire Regiment upon leaving Trinity College, Cambridge, he later transferred to the Tank Corps.

For his gallantry and devotion to duty, Major Pearson was awarded the Distinguished Service Order, the citation for which says:- “Following a successful attack with his tanks at very short notice, he captured a village in the enemy’s lines. Two days following the village’s capture he was again in action with excellent results.”

Despite his exploits during the Great War, it is probably fair to say that it will be for his exceptional skills as a golfer that “Algy” Pearson is most memorable. As a boy he spent his childhood at Birkdale, Lancashire, where a lot time was spent on the golf links of Royal Birkdale, and a love of the sport coloured his whole life.  At Cambridge gaining his B.A. in 1910 he was a member of the golf team that competed against Oxford and in 1927, he represented Great Britain in the international match against South Africa.  For the year 1927-1928, ‘Algy’ Pearson was the Club Captain at Littlestone Golf Club and remained an active and valued member of both the Committee and Greens Committee for years until his death in 1962.

Although the Pearson family moved away from the area in 1949, during Major Pearson’s time at Littlestone, he won just about every competition that he took part in, which is not really surprising with a handicap of plus 2.

Via members of the Pearson family, it was nice to learn that they were pleased to see that Denis is commemorated on the Aldington, Bonnington & Hurst civic war memorial with his second initial shown as C, the reason being that on the Second World War tributes in the parish church of St. Martin, Aldington and in the chapel on Forge Hill, he is erroneously commemorated as Denis G. Pearson.