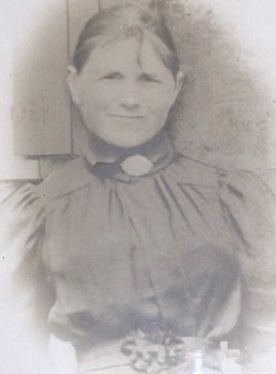 Edith was born in Aldington, Kent on Friday 14 September 1866 and was the third child of William Tutt and Mary Ann Tutt (née Ames), both of whom were also natives of Aldington. The first census on which Edith was recorded was that of 1871 when the Tutt family lived in Aldington Frith and Ediths’ 37 year old father was employed as an Agricultural Labourer.

It was not until Sunday 25 July 1880 that Edith was christened at the parish church of St. Martin, Aldington at which time her family resided at Hanger Hall, Aldington, and her father William was recorded as being employed as a Labourer. Also christened at the church during the same service was one of Ediths’ elder half sisters, 21 year old Laura Elizabeth Tutt who was born in Aldington on Monday 11 July 1859. Ediths’ parents William Tutt and Mary Ann Ames had married in the same church on Sunday 27 July 1862, at which time William was recorded as being a widower, employed as a Labourer, and the son of Thomas Tutt who was also employed as a Labourer. Mary was recorded as being a spinster and the daughter of Labourer, William Ames. The marriage of Ediths’ parents was the second of her father, who had previously married widowed Mrs. Mary Franks (née Hodgkin) at St. Martin’s church, Aldington on Saturday 29 January 1853. Mary was a daughter of Labourer, Edward Hodgkin.

On Saturday 22 April 1893, 26 year old Edith married 23 year old George Daniel Owers from Bermondsey at the parish church of Holy Trinity, Westmarsh, Canterbury, Kent. Their marriage was recorded in the Eastry, Kent Registration District during the second quarter of 1893. George had enlisted in the Chatham Division of the Royal Marine Light Infantry on Friday 6 December 1889. The church where Edith and George had married is now a private residence called Trinity House, in front of which is the village of Westmarsh civic war memorial.

When the 1911 census was conducted, 44 year old Edith and her children, 17 year old Lily Owers who was born at Nash, Ash, Canterbury, Kent, 10 year old Harold St. Vincent Owers, and 6 year old Hetty Owers who were both natives of Wingham, Canterbury, Kent were living as Boarders at 8 North Street, Deal, Kent. Recorded as being the head of the house by the enumerator was 24 year old Deal native William Franklin, who was a Merchant Sailor and a member of the Royal Naval Reserve.

On the night of 28/29 September 1917 a number of bombing raids were carried out by 27 Deutsche Luftstreitkräfte (German Air Force) aircraft on south east England, which had included those on London, Ipswich in Suffolk, Harwich in Essex plus those on Dover and the Isle of Thanet. A total of 25 Gotha bombers and a pair of the huge Zeppelin-Staaken R.VI aircraft participated on the raids. By the time of the above raids, the German pilots had learned that when the night sky was clear enough, they would be heading in the direction of London if they headed in the direction of the star Arcturus, in the constellation of Boötes, and from where they were based would usually fly over the city of Ostend, Belgium. Due to the bad weather on the night of the raids, a number of the Gotha’s turned back before reaching England that night.

As the air raids were taking place, Edith was seated in the dark in the sitting  room of her home Verriers Cottage, Middle Deal Road, Deal, Kent. The room in which she and other family members were gathered was adjacent to the street. Having dropped their bombs the German aircraft were on the return leg of the raid when they were attacked by a number of British fighter aircraft, and fired on by anti-aircraft guns of the Royal Garrison Artillery. One of the shells from a anti-aircraft gun fell to earth and hit Middle Deal Road, exploding right in front of Verriers Cottage. Debris from the exploding shell blew the windows in and Edith was seriously injured when she was hit in the head. She was taken to the Victoria Hospital at Deal for treatment but died the following day despite the best efforts of the hospital staff. Her death was recorded in the Eastry, Kent Registration District during the fourth quarter of 1917.

Of the German bombers which had made it to England and participated on the raids, two of them were lost having come down in the English Channel and another crashed on landing. On the night of Ediths’ death, raids by 7 Gotha and 3 Zeppelin-Staaken R.VI bombers were carried out on London and Sheerness, Isle of Sheppey and the surrounding area of the island, the latter being unsuccessful. Another raid on the same night was made on the Explosive Works at the creek Faversham. Four bombs were dropped, all of which thankfully missed their intended target. During the raid of 29/30 September 1917, 14 people were killed and 87 were injured, most of those who lost their lives or were injured were in London. One of the Gotha bombers on that occasion was shot down off the coast of Dover by a gun barrage.

William Thomas Franklin which whom Edith and her children were living in Deal at the time of the 1911 census, also lost his life during the Great War.   He was serving as a Seaman in the Royal Naval Reserve onboard H.M.S. Cressy and died on Saturday 22 September 1914. He is commemorated on the Chatham Naval Memorial. Panel 8.

The Imperial War Graves Commission was responsible for burying and commemorating British Empire Great War dead and missing armed service personnel. In 1960 its name was changed to the Commonwealth War Graves Commission to reflect the changing state of the British Empire. Today the C.W.G.C. is responsible for 1.7 million cemeteries and memorials of both World Wars, in more than 150 countries. The I.W.G.C. was tasked with compiling as complete a list as possible of the many civilians whose deaths were due to enemy action during the Second World War, and as the result of same over 67,000 civilian casualties are commemorated. Unfortunately no provision was put in place in order to commemorate British Empire civilian deaths due to or resultant of Great War enemy actions. Although the total number of Great War civilian casualties would be significantly smaller that those of the Second World War, there still is not form of official source of reference or tribute to those such as Edith, and it is probably fair to say the above is the primary reason why so few civilian Great War casualties are commemorated on local or national forms of remembrance to the victims of the Great War.