Frederick was born in Folkestone, Kent, and his birth recorded in the Elham, Kent Registration District during the first quarter of 1896.  The Miles family was recorded as living at Blomfield Villa, Bonnington in the 1901 census, where 38 year old Lydd native and Own Account General Carter Charles Henry Miles was the head of the house. This indicates that Frederick did not live in Folkestone for very long.

It has not been possible for the compiler of these brief commemorations to add here when it was that Frederick had been called up for military service, or from what date it was he had served in Mesopotamia. Verbal evidence obtained from a number of now deceased residents of Aldington and Bonnington by the compiler over many years, highlights remarkably similar comments regarding the bad feeling there was in Aldington, Bonnington and the former parish of Hurst, when Frederick and his younger brother Herbert Walter Miles were both called up, as both were remembered as having health prevailing issues and parishioners were concerned about who would help at the family smallholding at Thrift Cottage, Cherry Gardens, Bonnington if both of the brothers were away from home.

Frederick had been amongst the R.A.S.C. personnel of the 20th Combined Field Ambulance of the Royal Army Medical Corps, and Royal Army Service Corps which served with the Meerut Division in Mesopotamia during the Great War.

It was not wounds that cost Frederick his life but illness in the very last stages of the Great War. His Death Certificate shows cause of death to be Tubercular Lung. Hospitalised because of his illness, Frederick had been left behind in Mesopotamia when his unit had moved on, and by the time of his death many of his former comrades had returned to civilian life.

The cemetery where Frederick is now at rest, is located on the southern edge of the British Embassy’s Residential compound in Gholhak three miles from the centre of Tehran. The War Cemetery was completed in 1963. There are now 412 Commonwealth burials of the Great War, 13 of which are unidentified, commemorated in this site. There are 152 Commonwealth burials of the Second World War commemorated here. In addition there are also 14 non world war burials and 25 Foreign National burials. The Qajar monarchy gave the land for Gholhak Garden to the Great Britain in the 19th century for the British Ambassador to use as a summer residence.

Of specific interest to natives of Aldington who were born at either the former Nursing Home at Cloud End, Mill Road, Aldington, or later at that with the same name at Forge Hill, Aldington, is that Fredericks’ mother Elizabeth, who was born at Hurst, was a cousin of the much loved and respected Midwife Miss Brazier. 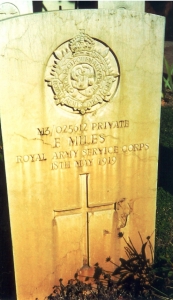 Thanks are due to the British Embassy staff at Gholhak, Tehran, Iran in 1980 for very kindly providing the compiler of these brief commemorations with the photograph of Fredericks’ headstone as shown above right.