Edward, who was known by all and sundry as “Sonny” was born at Lawson Cottage, Bonnington, Kent on Wednesday 23 December 1896, and baptised at the parish church of St. Rumwold, Bonnington, Kent on Friday 19 March 1897, at which time his father George was employed as a Labourer.

The first census on which Edward was recorded was that of 1901 when the Hogben family resided at Lawson Cottages, Bonnington. His father  40 year old Brabourne, Kent native George Hogben, was employed as a Farm Waggoner. The family was still living at Lawson Cottage, Bonnington when the 1911 census was taken and 14 year old Edward was recorded by the enumerator as George Hogben, and employed as a Lad in Farm Work about house etc.

Eager to enlist for military service and to ‘do his bit,’ Edward passed his requisite army medical examination on Sunday 30 August 1914, which was conducted by Temporary Lieutenant A.L. Christie of the Royal Army Medical Corps. 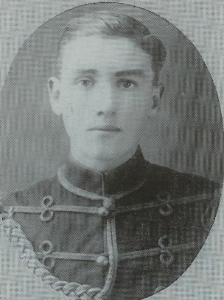 Edward enlisted in the army at Shorncliffe, Kent on Tuesday 1 September 1914 signing up for ‘3 Years Service or During the period of the War.’ He lied about his age and stated that he was 19 years and 8 months old. On the completion of the enrolment process, Edward was attested to serve as a Private in the 9th Reserve Cavalry Regiment, which had been formed at Shorncliffe on mobilization in August 1914 and was affiliated to the 3rd (King’s Own) Hussars and 7th (Queen’s Own) Hussars. The photograph of Edward (left) suggests that it was taken when he was serving as a Private in the 9th Reserve Cavalry Regiment

Originally the 29th Division had been destined to serve on the Western Front as part of the British Expeditionary Force, but due to the pressure put on Lord Kitchener to launch a ground attack at Gallipoli, he was forced to deploy the 29th Division there. The original members of the 29th Division destined for Gallipoli embarked at the port of Avonmouth, Bristol on a number of ships between Tuesday 16 and Monday 22 March 1915 and went via Malta to Alexandria, Egypt. Most of the personnel of the 1st Battalion, Border Regiment embarked on the 13,504 ton Cunard Line vessel Andania which had been requisitioned as a troopship; and was comprised of 26 officers, including the Commanding Officer Lieutenant-Colonel Robert Ouseley Cuthbert Hume and 887 other ranks.

The bulk of the 29th Division personnel landed at Cape Helles on Gallipoli on Sunday 25 April 1915, and subsequently took part in several costly actions that resulted in the need for reinforcements from Edwards’ battalion. On the nights of 7-8 January 1916, the 29th Division was evacuated from Gallipoli.  Edwards’ battalion had moved from the rest camp on Friday 7 January to the beach defences at “W” Beach and covered the evacuation the following night.

Having survived the horrors and carnage of Gallipoli, and subsequent service in Egypt and on the Western Front, Edward was killed in France when the British attacked the enemy line south of the village of Le Transloy, between the Pas de Calais town of Bapaume and the Somme town of Combles. He is numbered among the 42 officers and other ranks of the 1st Battalion, Border Regiment who died on Saturday 27 January 1917, 31 of whom have no known grave and are commemorated on the Thiepval Memorial to the missing of the Somme.

On Monday 7 July 1919, Edwards’ mother completed a copy of Army Form A.F. W.5080 in order for her to be sent a bronze memorial plaque (aka Dead Man’s Penny) and accompanying certificate in memory of Edward. At the time of completing the form Edwards’ parents still lived at Lawson Cottage, Bonnington, and their surviving son 19 year old Henry was recorded as serving at the Naval Base, Falmouth, Cornwall. Edwards’ sisters; 35 year old Miss Louisa Hogben and 32 year old Mrs. Alice Marriott were recorded as both residing at Saltwood, Hythe,  28 year old Mrs. Ethel Nicholls was living at Parham, Suffolk, and 25 year old Miss Edith Hogben was residing at Royal Tunbridge Wells, Kent. The form was witnessed by the Reverend William Henry Symonds of The Rectory, Bonnington who had been the Rector of Bonnington and of Hurst since the previous year.

Edwards’ sister Alice Mary who was born at Aldington on Friday 2 September 1887, was married to Downham market, Norfolk native & Second Boer War hero William Marriott, D.C.M. and for several years owned the Post Office and shop at The Nook, Bonnington. During the Great War, William was Mentioned in Despatches.

It would be remiss not to mention here that another of the N.C.O.s in Edwards’ battalion who took part in the action which cost Edward his life, was fellow Gallipoli veteran 23 year old Serjeant Edward John Mott, D.C.M. who was instrumental in capturing an enemy machine-gun during the attack, for which he was awarded the Victoria Cross.

The citation for the Victoria Cross awarded to Serjeant Mott says; “For most conspicuous gallantry and initiative when, in an attack, the company to which he belonged was held up at a strong point by machine-gun fire. Although severely wounded in the eye, Serjeant Mott made a rush for the gun, and after a fierce struggle seized the gunner and took him prisoner, capturing the gun. It was due to the dash and initiative of this non-commissioned officer that the left flank attack succeeded.” Remarkably, unlike Edward Hogben, Edward Mott, V.C, D.C.M. who was a native of Drayton, Oxfordshire survived the Great War, and died on Friday 20 October 1967 at his home, 38 New Yatt Road, Witney, Oxfordshire.