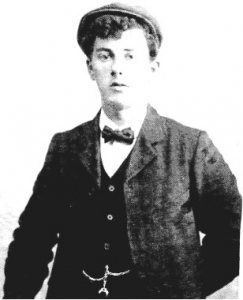 Commemorated on the Lenham, Kent civic war memorial, also on the Great War memorial plaque in the parish church of St. Mary, Lenham and in the Queen’s Own (Royal West Kent Regiment) Book of Remembrance in St. Faith’s Church, Maidstone, Kent.

Lewis, brother of naval casualty George Hodgkin ,who is also commemorate, lived with their family in Aldington, at The Forward, Church Lane, and was a pupil at Aldington village school.

At the commencement of the Great War, the 2nd Battalion, Queen’s Own (Royal West Kent Regiment) was initially used in the role of Internal Security Troops in India, leaving for Bombay (now Mumbai) on Saturday 30 January 1915 en-route for service in Mesopotamia, and arrived at Basra, Mesopotamia on Saturday 6 February 1915, attached to the 12th Indian Brigade. Whilst here, Lewis was appointed an unpaid Lance Corporal on Friday 17 September 1915.

Two Companies of the 2nd Battalion, Queen’s Own (Royal West Kent Regiment) were attached to the 30th Brigade (6th Poona Division).  In November 1915, Lewis was amongst the officers and other ranks in his battalion that were attached to that formation and were besieged at Kut-el-Amara. The survivors of the siege were captured on Saturday 29 April 1916. The siege of the 8,000 strong British Army garrison starting on Tuesday 7 December 1915, is known as the First Battle of Kut and is historic in that it was the first time that aircraft were used in airdrop relief operations. Given the size and type of the planes in use at the time, only a very small amount of the rations required could have been dropped, but it was entirely due to the commendable and brave efforts of the pilots, flying low and facing Turkish gunfire, that 16,800 pounds of much needed food was dropped to the hungry garrison.

Towards the end of the siege the daily ration for British troops was reduced to just ten ounces of bread, and one pound of horse or mule meat. During both the five month siege and the long marches that followed the surrender, it was the Gurkha soldiers that fared best, and had the largest proportion of survivors. One of the reasons for this is said to be that the Indian soldiers, who were alongside them when besieged, were unable to eat the meat available due to religious constraints and died of scurvy at the rate of between 10 and 20 every day – leaving more food available for the stoic soldiers from Nepal. In total an estimated 1,746 people died during the siege from wounds or disease, and countless more died during the long marches that followed the surrender.

Lewis died of dysentery whilst a prisoner of war at Yarbaschi, Anatolia (now Yarbashi, Turkey), which is where he was originally buried. His body was subsequently moved to Baghdad (North Gate) War Cemetery which was begun in April 1917. The cemetery has been greatly enlarged since the end of the Great War by graves brought in from other burial grounds in Baghdad and northern Iraq, and from battlefields and cemeteries in Anatolia where Commonwealth prisoners of war were buried by the Turks. At present, 4,160 Commonwealth casualties of the Great War are commemorated by name in the cemetery, many of them on special memorials though there are 2,729 unidentified burials from this period.