Commemorated on the Plymouth Naval Memorial. Panel 4, and on the Lenham, Kent civic war memorial, also on the Great War memorial plaque in the parish church of St. Mary, Lenham. 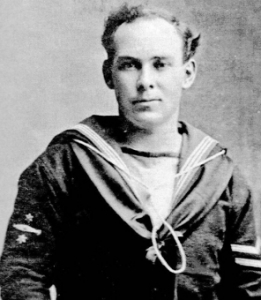 George has the sad, unenviable, distinction of being the first of the former residents of Aldington or Bonnington to die in the Great War. At the time of his death George was on loan to the Royal Australian Navy from the Royal Navy, in which he had the service number 226508. He was born at Lenham, Maidstone, Kent on Saturday 16 April 1887 and was the son of Aldington native George Hodgkin, and Lenham native Mary Ann Hodgkin (née Harris). The various branches of the Hodgkin family had resided in Aldington for a number of generations, all of whom it would seem had lived at Church Lane, with many family members having resided at The Forward, including when George and his brother Lewis who is the next casualty briefly commemorated. Both attended Aldington village school. George joined the Royal Navy as a Boy at Chatham, Kent on Monday 27 April 1903, prior to which he had been employed as a Labourer. As a Boy 2nd Class he initially served on the 4,236 ton Boys training ship H.M.S. Impregnable at Devonport, Devon.

H.M.S. AE1 on which George was serving when he perished was the first of two E Class submarines built for the fledgling Royal Australian Navy. Accompanied by her sister AE2, the AE1 sailed from England and reached Sydney, Australia on Sunday 24 May 1914, manned by a mixed crew of officers and ratings drawn from the Royal Navy, Royal Australian Navy and a rating of the Royal New Zealand Navy.

At the commencement of the Great War the AE1 joined the naval forces which were assigned to the capture of the German Pacific colonies. With AE2, she took part in the operations leading to the occupation of German New Guinea, including the surrender of Rabaul on Sunday 13 September 1914. At 0700 hours on Monday 14 September the 750 ton River-class torpedo-boat destroyer H.M.A.S. Parramatta left her night patrol ground off Raluana Point, and proceeded at slow speed in the direction of Cape Gazelle to rendezvous with the AE1, and conduct a patrol in St. George’s Channel, to the south and east of the Duke of York Islands. The two vessels met off Herbertshöhe at 0800 hours and exchanged signals before proceeding to Cape Gazelle where they arrived approximately one hour later. A further exchange of signals followed during which H.M.A.S. Parramatta advised AE1 that her orders were to search to the south with the submarine and anchor off Herbertshöhe. H.M.A.S. Parramatta then proceeded independently in a southerly direction while AE1 advanced in a north-easterly direction. The weather was hazy and visibility was observed to be between nine and 10 nautical miles, at times decreasing to only five miles. H.M.A.S. Parramatta reported that the AE1 was obscured by the haze for some time, as was the nearest land. Given these conditions, H.M.A.S. Parramatta’s commander, Lieutenant William Henry Farrington Warren, R.A.N., considered it advisable not to lose sight of the submarine for too long.

Doubtless due primarily to the importance and significance with which the loss of the very first submarine of the Royal Australian Navy was, and indeed still is regarded in Australia, George and the other 34 submariners who perished with him are most certainly not forgotten by the citizens of Australia and all the crew of the submarine have numerous forms of commemoration throughout Australia. An indication of how H.M. Australian Submarine AE1 and her crew are still remembered was made clear a few years ago when a commemorative postal stamp was issued. In addition to the memorials, and the issuing of the commemorative stamp, another form of tangible ‘evidence’ of the sense of loss was the number of searches that continued for many years to try to locate the wreck of the AE1.

In 2017 using the vessel Fugro Equator the wreck of the AE1 was finally discovered. She was under 300 metres of water just off the Duke of York Islands, near the former East New Britain capital Rabaul. It was the fourteenth attempt to find the submarine and the resting place of her crew. On Thursday 21 December 2017, the Australian Government formally announced that the exact location of the wreck would not be publicly disclosed. In April 2018, an expedition was conducted using the Research Vessel R.V. Petrel to perform a detailed Remotely Operated Vehicle survey of the wreck of Georges’ submarine. The ship’s R.O.V., fitted with high-definition video and stills cameras, undertook a comprehensive, non-invasive inspection of the submarine, revealing new information. Over 8000 digital still images were collected during the survey and those images have been processed to generate a full photogrammetric 3D model of the entire wreck. A team of experts is now analyzing the footage to better understand what happened to H.M.A. S/M “AE1.”

The photograph above, was taken from the bridge of the 5,880 ton Challenger class cruiser H.M.A.S. Encounter in September 1914, and shows the submarine AE1, the photograph also shows the 22,130 ton Indefatigable class battle cruiser H.M.A.S. Australia, and the 750 ton River class destroyer H.M.A.S Parramatta in the background, at which time they were all off Rossel Island, New Brittain.