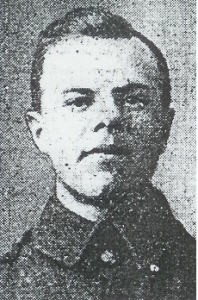 Commemorated on the Thiepval Memorial, Somme, France. Pier and Face 11 C, and on the Church Hougham, Dover, Kent civic war memorial and also in the Queen’s Own (Royal West Kent Regiment) Book of Remembrance in St. Faith’s Church, Maidstone, Kent.

Frank was born on Friday 15 November 1895 at The Green, Aldington, at which time his father Aldington native Thomas William Hodgkin was a Grazier.  He enlisted in the army as a regular soldier for 7 years with the Colours and 5 years in the Army Reserve, at the Municipal Buildings, Canterbury, Kent on Wednesday 11 November 1914. When he enlisted, Frank stated that he was born at Aldington, Kent, was 19 years old and employed as a Baker and residing as a Lodger at Hythe Road, Ashford. Prior to enlisting in the army Frank had been employed by a Mr. Dean at Highfield Bakery, Willesborough, Ashford, Kent. He was attested to serve as a Private in the Queen’s Own (Royal West Kent Regiment).

The following is a brief extract from the history of the Queen’s Own (Royal West Kent Regiment) during the Great War, at the time Frank fell; “Then, after two strenuous days in the line came another big effort all along the front from Guillemont to Pozières. In this attack the battalion’s special objective was Wood Lane, a trench 400 yards ahead and just beyond the road which the brigade had tried to reach on July 20th. This trench lay over the crest of a gentle slope and could not be seen from our front line. Its capture was essential as a preliminary to the attack on Switch Trench, the main objective of the Division. This, which ran more or less E. and W. through the Northern end of the High Wood. was to be attacked at 1 a.m. on July 23rd. The preliminary attack by the 13th Brigade was timed for 10 p.m which allowed little time for bombarding or for accurate location and registration of the object. However, the lie of the ground allowed the leading companies, A and B, to advance almost to the crest before the barrage lifted. Thanks largely to this they reached the road almost without a casualty and pushed on towards their objective. But as they topped the crest rifle and machine-gun fire caught them in flank from High Wood and in front from Switch Trench. Many officers and men fell, and though at two points the trench was reached and a lodgement made, both parties were unsupported, for the battalion on the right had not got as far forward, and High Wood itself had again proved impregnable. A platoon of C, under Lieut. Peachey, had been detailed to guard the left flank and to capture the strong point believed to exist just inside the Wood, but it was shot down almost to a man and the enfilade machine-gun fire from this strong point proved most effective. Nevertheless both detachments held on with great determination. On the right 30 men of A established themselves in the trench though all their officers had fallen and were only at length dislodged when their supply of bombs ran out. On the left a platoon of B under Lieut. J. J. Scott and Sergt. Franklin occupied about 40 yards of the trench, inflicted many casualties on the Germans and maintained themselves firmly for nearly four hours, though the enemy made several bombing attacks from the left. These were repulsed mainly through the skill and gallantry of Pte. Butlin, who sprang over some German bombs which were just about to explode and, hurling his own bombs at the Germans, drove them back and secured the flank of his party. At another point Sergt. Traill collected a few men, dug in 15 yards from the German trenches, and hung on in this advanced position for several hours, killing several Germans who came out to capture some of the British wounded, and when he finally retired brought back several wounded with him. In the end, however, all these scattered parties had to be withdrawn to the original line. Nearly 400 of those who had started to the attack were casualties, Captain Bennett, Lieuts. Healey and Bartlett, 2nd Lieuts. Cornford, J. A. Fleming, Leatherdale, Cross, Lewinstein, Fox and Gillett were killed, and four other officers wounded. Many who would otherwise have been missing were brought safely in, thanks to the splendid courage and devotion of Corpl. Hatch, the N.C.O. in charge of the stretcher-bearers.”

Frank was numbered among the 140 personnel of his battalion who lost their lives on Saturday 22 July 1916 during the Battle of the Somme, and is numbered among exactly 100 who have no know grave that are all commemorated on the Thiepval Memorial to the missing of the Somme.

Dated Friday 29 December 1916, Franks’ father wrote a letter to the Officer in Charge, No.10 District & Infantry Record Office, Hounslow, Middlesex, asking if there was further information about Frank, as they had not heard anything from him or any official body, after previously being officially notified that he had been wounded & reported missing on Saturday 22 July 1916. A written response was made by the above office to Franks’ father the day after he had written the letter at Church Hougham.

Following Franks’ death, the Army Council at the War Office made the decision that for official purposes, it was to be assumed that he had died on or after 22 July 1916.

On Friday 20 June 1919, Franks’ mother completed a copy of Army Form W.5080 in order for her to be sent a bronze memorial plaque (aka Dead Man’s Penny) and accompanying certificate, in remembrance of him. The form was witnessed by Arthur Macdonnell Evanson, J.P. of Chilverton Elms, Hougham, Dover, Kent.

Franks’ brother and fellow Aldington native Percy William Hodgkin had moved away and was living in Middlesex when he enlisted in the army in London on Monday 15 November 1915, and was attested to serve in the Army Cyclist Corps. Fortunately Percy survived the Great War and was transferred to the Army “Z” Reserve on Tuesday 11 March 1919, having by then served overseas on active service from 10 January 1917. Percy died at Willesden, Middlesex on Wednesday 7 June 1961.

Another of the Hodgkin brothers, Cyril who was born at Lympne on 4 March 1900, also served for a short period during the Great War, having enlisted at Canterbury, Kent in May 1918, aged 18 years and 50 days. Cyril was attested to serve as Private, 83458 in the Royal Fusiliers (City of London Regiment), and initially served in the 53rd (Young Soldier) Battalion of the regiment, prior to being posted to the 51st (Graduated) Battalion of the regiment at Newmarket on Wednesday 12 June 1918. He later served with the Royal Army Medical Corps at Clipstone Camp near Mansfield, Nottinghamshire. On Sunday 22 February 1920 Cyril was transferred to the Army “Z” Reserve and lived to the ripe old age of  97 years of age when his death was recorded in the Tavistock, Devon.