Commemorated in the Queen’s Own (Royal West Kent Regiment) Book of Remembrance in St. Faith’s Church, Maidstone, Kent and on the Matfield, Kent civic war memorial as shown above right, but erroneously as still being a member of the West Kent Yeomanry. 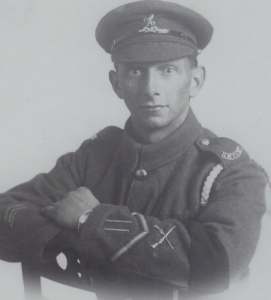 Albert was born in Arpinge, Folkestone, Kent on Monday 15 November 1886. At the time of the 1891  census the Hills family lived at Grove Farm, Newington, Hythe, Kent. Albert’s father, 43 year old Brabourne, Kent native Henry Hills, was a Farmer. By the time of the 1901 census the family had moved and were farming at Lower Park Farm, Church Lane, Aldington and Albert was employed by his father on the farm.

Possibly Albert decided that farming was not for him, as when the 1911 census was taken, he was recorded as being a Lodger at Matfield Green, Kent and was employed as a Grocers Assistant. He married 22 year old Smeeth, Kent native Miss Hilda Prebble at Sellindge, Kent on Tuesday 17 June 1913.

Three years later Albert enlisted in the army at Royal Tunbridge Wells. He initially served as a Private in the West Kent (Queen’s Own) Yeomanry prior to being transferred to serve in the Queen’s Own (Royal West Kent Regiment), and was serving in that regiment when he was posted to serve on the Western Front with the British Expeditionary Force. 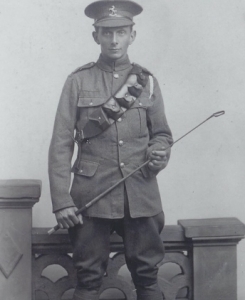 Albert was killed in action during a period when  the 1st Battalion, Queen’s Own (Royal West Kent Regiment) was suffering comparatively very few fatalities, or woundings, but several of the personnel in the battalion were reporting sick. Some were victims of the worldwide influenza pandemic of that time, which ultimately claimed far more lives than those due to military actions during the Great War. Brief reference is made to the influenza in the following extract from the history of the Queen’s Own (Royal West Kent Regiment) during the Great War, and also draws the readers eye to the low number of casualties.

“The Forest of Nieppe was to become very familiar to the 1st R.W.K. From the middle of April to the beginning of August the Fifth Division held this important sector. It was a time of constant activity. The Germans were constantly shelling the front line and subjecting the support and reserve positions to gas shelling, their aircraft concentrated their efforts on night bombing, and their machine-guns were extremely active. But they got as good as they gave. The British guns plied them assiduously with retaliatory fire and the battalion’s patrols obtained the upper hand in No Man’s Land and brought in much useful information. May saw the battalion visited by the influenza epidemic which was raging on the Western Front; an enormous number of men went sick and one officer, Lieut. R. H. Clarke, who had only just come out, succumbed to it. But against this casualties were low, only 5 men killed and 3 officers and 30 men wounded for May, and 2 men killed and 19 wounded for the first ten days of June.”

On Wednesday 8 May 1918, three other ranks of the 1st Battalion, Queen’s Own (Royal West Kent Regiment) were killed in action, one of whom was Albert. The three men are at rest in adjacent graves at Tannay British Cemetery. In addition, 35 year old Captain Francis Ingleby Harrison, who was a Planner in the Malay Straits Settlements prior to enlisting in the army in 1915, also died on Wednesday 8 May 1918. Francis is at rest at Aire Communal Cemetery, Pas de Calais, France. 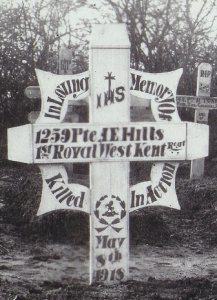 The photograph shown is that of Albert’s original wooden grave marker at Tannay British Cemetery. Via Albert’s relations including the late Peter Godden, who for many years kept the churchyard at Aldington in good condition, it was learned that Albert’s mother had been a early visitor to his grave, when the wooden grave marker was still in place. 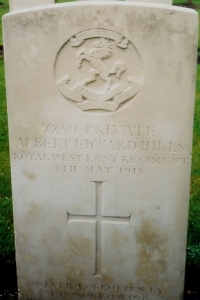 Albert’s widow Hilda did not remarry and died on Thursday 17 February 1977, at which time her home address was recorded as “Dunscroft,” 155 Maidstone Road, Paddock Wood, Kent.

The bottom of Albert’s headstone at Tannay British Cemetery, Thiennes has the following inscription which was chosen and paid for by his widow Hilda.