By far and away, of the fifty casualties who have been commemorated on the Aldington, Bonnington & Hurst civic war memorial, Gerard has proved the most difficult to research for inclusion on the war memorial. 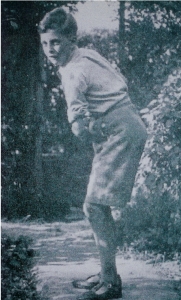 When the compiler was seven years of age, it was through a chance meeting in Aldington with a family from London that it was learned that at least one Second World War casualty was not commemorated in the parish.  It must have been in memory of Gerard, that the family had come to view the then non-existent war memorial and lay a floral tribute on it. It is thanks to Gerard’s former Aldington school friends, the late Mrs. Marjorie Lee (née Barling), the late Clive and Peter Boulden and the late Aubrey Hyder, that Gerard was finally commemorated in Aldington. All four were genuinely saddened by the fact Gerard had not been commemorated in Aldington where a large part of his brief life was spent.

According to some of his former class mates, Gerard was not born in the village but came to Aldington with his mother when she was employed by Mrs. Elsie Hueffer (née Martindale) at Kitcat, Knoll Hill, as a housekeeper when he was still fairly young. Elsie Hueffer was the wife of the author Ford Madox Ford, who had served as a officer in the Welch Regiment during the Great War from 1915.

Gerard was remembered as being a keen sportsman which would seem to be the case, as the photographs of him as a boy came to light in response to the appeal for photographs of our war dead, show him as a cricketer. Gerard was a native of Middlesex, and prior to the Second World War he and his mother had left Aldington. At the time of his death, they are shown as being residents of South West London.

Gerard’s army service number is clearly indicative of him originally having served in the Rifle Brigade, it being in the sequence of numbers 6905001 – 6972000 which were issued to the Rifle Brigade.

On the day prior to Gerard being killed in action, the 68th and 88th Batteries had returned to the Regiment. Later that day a operational order for the defence of the River Escaut was issued. As a result of the order the Batteries were soon in action, although there was very little enemy activity during the day, most of the time was spent digging and strengthening positions. At approximately 1100 hours the 38th Battery rejoined the rest of the Regiment, having earlier in the day provided both anti-aircraft and anti-tank defence to the 3rd Division’s retirement. The enemy were reported to have crossed the Escaut at approximately 1600 hours at the 44th Division’s front, and part of the enemy force was reported to be tanks.

Although not involved, Gerard’s Regiment reported heavy fighting to the front of their positions at 2030 hours. Things took a turn for the worse at approximately midnight when enemy guns engaged the Regiment, which returned fire. German Artillery continued to shell all Battery positions at intervals throughout the early hours of the following morning, resulting in several hits on the nearby village.  Although the war diary makes no mention at this stage of any casualties, it does say that Major Funnell was evacuated sick, but there was at least one death as Gerard died.

A cutting in a field of clover next to the Regimental Headquarters was spotted and thought to be a sign to enemy aircraft. On Tuesday 21 May, no mention is made appertaining to any aircraft activity despite the apparent field marker, but no physical presence at all. 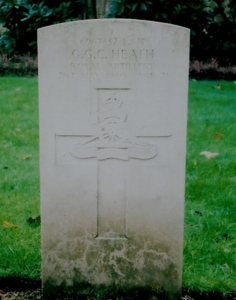 No enemy tank activity was reported as a follow up to the river Escaut crossing of the previous day. Had tanks or a lone tank engaged the Batteries, it would have said so in the war diary entry for the day, and it would have been the duty of the officer compiling the diary to that. Reading through the diarist’s sequence of the day’s events, it is also clear that no enemy Infantry had attacked the guns.

From the aforementioned absence of the Luftwaffe, tanks or Infantry, it would appear that Gerard lost his life at some time during the shelling of his Battery. Exactly how or what time in the day’s events it is impossible to find out, but as Gerard has an individual clearly marked grave, it would seem reasonable to assume that his death was not due to a direct hit by a high explosive enemy shell.