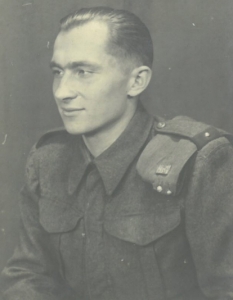 Alois was born at Brno-Komín, Moravia, Czechoslovakia on Thursday 16 October 1919.  He came to the UK to serve with the British following the fall of France in 1940 and married 24 year old Aldington resident Miss Eileen Hartley Heap in 1942.

In July of 1940 Czechoslovak servicemen arrived in Britain  and were sent to a camp at Cholmondeley Castle to the west of Nantwich, Cheshire. They had signed up before embarkation as volunteers for new Czechoslovak units. Many men were unhappy with their officers or with the politicians who were recognised by the allies as the Czech government in exile. Communists among the men contacted Communist Party of Czechoslovakia (KSČ) organisers already in Britain and mounted a campaign among the soldiers, with a view to refusing to serve under the reactionary leadership. After several days they stated that their group was preparing to leave the Czechoslovak forces. However, the military command moved first and on Tuesday 23 July 1940, they gathered the men and called for those who refused to obey the orders of their commanders to make themselves known. More than 500 men, including communists and former International Brigade members who had fought in the Spanish civil war, did so. They were disarmed, separated from the others, and billeted in an isolated area of the camp where they selected their own officers.

The former (and future) President of Czechoslovakia Edvard Beneš visited the Czechoslovakian troops  at Cholmondeley Castle on Friday 26 July to try to calm the situation.  The officers ordered a welcoming parade, while the ‘mutineers’ remained on the sidelines. One of the ‘mutineer’ officers then placed himself at the head of these men and led them in their own separate parade past Edvard Beneš who took the salute. British Officers present noticed nothing out of the ordinary. Afterwards, Edvard Beneš spoke with an eight man ‘mutineer’ delegation and tried to persuade them against their decided course of action, but unfortunately in vain.

The next day, the order was given that all of the ‘mutineers’ were to be expelled from the Czechoslovak forces with immediate effect. A total of the 3,342 Czechoslovak force personnel remained loyal, one of whom was the then Vojín (Private) Alois Hanus.

The Brigade, under Major General Alois Liška was trained, organised and equipped along British lines. The troops who assembled at Falaise comprised a powerful mechanised all-arms force. The Brigade H.Q. included Cromwell IV tanks and Sherman OP tanks for forward observers. The main “teeth” of the Brigade were found in the two (later three) armoured Regiments. The 1st Armoured Regiment under Major S. Rezabek and the 2nd under Lieutenant Colonel F. Seda were similar, each comprising a R.H.Q. of Cromwell VII tanks and a troop of Sherman Firefly VC tanks armed with 17pounder guns. Forward observers were carried in Cromwell IV OP tanks.

Alois lost his life at the Calvados village of Tracy sur Mer, part of the west flank of the British 50th (Northumbrian) Infantry Division during the first days of the D-Day invasion, in close proximity to the port of Arromanches-les-Bains, also known as Gold Beach. At dawn on Wednesday 7 June, the personnel of the 1st Battalion, Hampshire Regiment resumed their progress towards Tracy-sur-Mer where the Germans did not offer very much resistance, despite the presence of snipers. Twenty German soldiers surrendered to the above battalion spontaneously without engaging with it. The village was liberated before 10.00hrs by the British, who were pursuing the enemy troops towards Manvieux.

Brief mention is made above about the liberation of Tracy sur Mer, it being three months prior to Alois’ death, which according to his son Michael was possibly the result of a motorcycle accident. Michael  kindly provided the compiler with the photograph of his father. 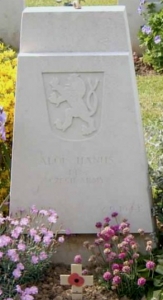 There was little actual fighting in Bayeux although it was the first French town of importance to be liberated. Bayeux War Cemetery, where Alois is at rest, is the largest Second World War Commonwealth cemetery in France. It contains burials brought in from the surrounding districts and from nearby hospitals. It was completed in 1952 and contains 4,144 Commonwealth burials from the Second World War, 338 of them unidentified. There are also more than 500 other nationality war graves, the majority being German casualties.