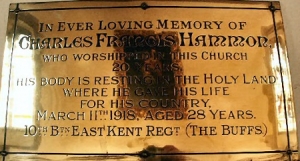 Charles’ father Victor Charles Hammon was the Licensee of the Castle Hotel, Saltwood from 1901 until his death on Wednesday 30 August 1911, and Charles’ mother then became the Licensee in August 1911.

It has not been possible for the compiler of these brief commemoration to ascertain from what date Charles had served with his battalion in Palestine. On Thursday 3 January 1918, Charles’ battalion returned to Beit Izza and Beit Likia, at which time the rain was so intense that men of all the units in the area were starting to endure extreme hardships, always wet, hungry, and with several men being ill with complaints that were related to the wet conditions. One partial solution to the problems was to build a reasonable road, along which provisions could be more easily transported, a real bonus if the road could be built would be to save wear and tear on the permanent road that ran from Latrun to Jerusalem. On its completion the new road was called Irish Road, as a compliment to the men of the 10th (Irish) Division that had completed the bulk of the work on it. From Wednesday 9 January to Thursday 7 March 1918, personnel of Charles’ battalion worked full time helping to construct the Irish Road. During the time the battalion had been in the Middle East, it had been deployed in the roles of mounted troops, foot soldiers and pioneers.

When the battalion took up its new positions on Thursday 7 March, it was to an outpost line to the front of Lake Balua. From the outpost line, a reconnaissance patrol was sent out from B Company who found that the village of Yebrud contained Turkish snipers. Following the ‘recce’ patrols report, the battalion were given orders to capture Yebrud and to occupy it by midnight. When the men chosen for the attack advanced, they found that Yebrud contained a lot more of the enemy than had at first been estimated. Reserve Companies were sent forward to join in the attack on the village which was eventually taken at around 0800 hours on Saturday 9 March. During the capture of Yebrud, Second Lieutenant F W H Cooper was killed, another Officer Captain Ponsonby and seven of the other ranks were wounded.

On 10 March the battalion continued to advance, and as it pressed on, all the time the terrain was getting more rugged and harder to negotiate and at times the officers and other ranks were virtually mountain climbing with all their arms and equipment. It was all quite hazardous but the biggest hazard was ever present threat of Turkish snipers. Personnel of A and B Companies, including Charles, took more enemy positions as they climbed. To reach the main Turkish positions of trenches and sangers, the soldiers of A and B Companies had a climb of three and a half-hours before they could engage the Turks. At the positions where The Buffs had reached they were at 3,000 feet, cold, tired and very wet.

When Charles’ battalion engaged the enemy, casualties were inflicted on both sides. Surprisingly no members of the battalion were killed outright but eight were wounded including Charles. Like a lot of his comrades, Charles carried his New Testament with him which was in his chest pocket, which was hit by a Turkish bullet that was deflected into his lung. 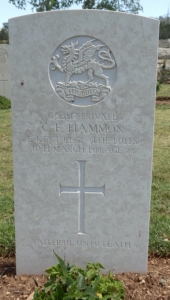 At 2030 hours on Sunday 10 March, Charles was admitted to the 230th Field Ambulance where Lieutenant-Colonel W. Archibald, R.A.M.C. and his staff tended to his serious wounds. Despite their best efforts, Charles died at 0230 hours the following day at Ain Ainia, his death being attributed to gunshot wounds. Initially, Charles was interred in the Bireh War Cemetery, Palestine but later moved to the Jerusalem War Cemetery. At the time of Charles’ death the home address of his widow and two children was at Sunny Cottage, New Road, Saltwood, Kent. The bottom of Charles’ headstone at Jerusalem War Cemetery has the following inscription which was chosen and paid for by his wife.