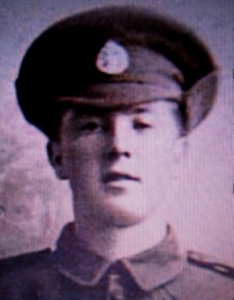 As both Frederick and his brother had Rifle Brigade regimental numbers, which are indicative of them enlisting early in the Great War, but Frederick (and probably Albert) did not serve on the Western Front with the British Expeditionary Force as a Rifleman in the Rifle Brigade until Tuesday 25 May 1915. Following his arrival on the Western Front, Frederick would have joined the 1st Battalion, Rifle Brigade in the field, at which time it was on the Ypres Salient in the area of the Ypres-Yser Canal, Belgium where during the month the battalion suffered five officer casualties and 395 other ranks.  Frederick was probably being among a draft of replacements for the casualties.

Frederick would almost certainly have been with his battalion when on Thursday 10 June 1915, it was in the support line near Zwaanhof Farm which is located near the canal. The next day the battalion commenced tours of the Pilckem sector trenches. Running roughly East to West and to the North of Ypres (now Ieper) is the N38. Due North of the road is Pilkem, a minor road runs from Ieper to Pilkem village running parallel to the N38, linking Pilkem and Boezinge is another minor road. Closing the square formed by these roads is the Yser Canal, which flows through Ieper. Within this square in July 1915, was a trench system called ‘International Trench,’ which was one of the German strong points and the objective assigned to Fredericks’ battalion to attack on the day he fell. Major-General Henry Fuller Maitland Wilson had not only expressed fears regarding the loss of life among the 4th Division which he commanded and included Fredericks’ battalion, but had even written a letter of protest to higher authority; it would appear that the courtesy of a reply to his letter was never sent. Leading up to the events of Tuesday 6 July was a series of communications, decisions and meetings between the Officers in Command in the area. Amongst the communiqués is a letter dated Thursday 17 June 1915 from 2nd Army to the VI Corps. The attack on International Trench was planned as going some way to improve the tactical situation at the very north of the Ypres Salient, and distract the Germans from a planned British attack at Hooge. Prior to the attack on International Trench, the Hooge attack was called off, but despite the protestations of a number of senior officers the International Trench raid went ahead.

At 0600 hours on Monday 5 July 1915, Fredericks’ battalion left their trenches, prior to which eighteen pounder field guns had smashed most of the German barbed wire in front of them to pieces. They rushed the Germans occupying the International Trench. Supported by the 1st Battalion, Somerset Light Infantry, they captured some 500 yards of the German line, with British bombers fighting German bombers. It was the commencement of a fight that would continue unabated for the next few days.

Official British casualty figures for the fighting over the International Trench quote a total of 366 dead between Tuesday 6 & Sunday 11 July 1915. The 1st Battalion, Rifle Brigade casualties were recorded as four officers and 67 other ranks killed, and 180 wounded including four officers. A total of 31 personnel of the 1st Battalion, Rifle Brigade who fell on Tuesday 6 July 1915 have no known grave, and are commemorated on the Menin Gate.

Talana Farm Cemetery at Boezinge (formerly Boesinghe) which lies on both sides of the Yser Canal. The village itself is on the West side of the canal, and was, during the greater part of the Great War, directly faced by the German front line on the East side; but to the South of it the German line sloped away from the canal South-Westward, and Talana Farm was approximately a mile from the edge of the Ypres Salient.

The cemetery was begun by French troops in April 1915, and taken over by the 1st Battalion, Rifle Brigade and 1st Battalion, Somerset Light Infantry in June 1915, and was used by fighting units until March 1918. Buried in Plot II, Rows E and F are a number of men of the 1st Battalion, East Lancashire Regiment who died in a small, but successful attack holding the line on Tuesday 6 July 1915. Plots III and IV contain many 49th (West Riding) Division graves and also those of the artillery units that took over the ground in August 1917.

There are now 529 Commonwealth servicemen of the Great War buried or commemorated in the cemetery. 14 of the burials are unidentified and there are special memorials to six casualties whose graves in the cemetery could not be located, and ten, in Plot I, Row E, are identified as a group, but not individually. It is probable that the cemetery contained other graves later destroyed by shell fire. The cemetery was designed by Sir Reginald Blomfield whose father had once been the Vicar of Aldington, Kent where he and Sir Reginald’s mother have a joint grave.

In the late 1990’s (1999)? prior to the extension of a industrial estate, a group of Belgian battlefield archaeologists’ called the Diggers excavated the area where International Trench had been. During the excavation a mass of artefacts were found, as were the remains of soldiers who had fallen on the day that Frederick died, included soldiers of the Rifle Brigade. All of the remains were buried with due respect and ceremony at Talana Farm Cemetery described above. It is possible that Frederick was numbered among the unidentified casualties at the cemetery for many years, but he could equally have been numbered among those more recently buried, having been found by the Diggers in the 1990’s.

Having visited the Menin Gate many times, the compiler always places a suitably inscribed wood cross in memory of the Aldington & Bonnington casualties commemorated on it. Due to the positions of the inscriptions on the different panels, the crosses have always been placed in the position shown above. The headstone shown in the photograph is at Talana Farm Cemetery and might be Fredericks’ 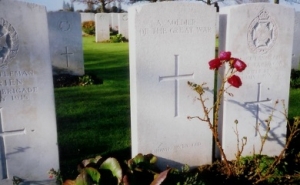