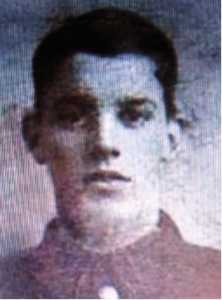 At the time of the 1911 census Albert’s parents and five of his siblings were residing at Marwood House, Aldington, Hythe, Kent. Head of the house was 55 year old Orlestone, Kent native George Henry Godden who was a Shepherd. Albert was not at his family home when the census was taken, and was living at 71 Onslow Gardens, South Kensington, London S.W. where he was employed as a Hall Boy. Head of the house was 43 year old Helen Matilda Dunn who was born at Hyde Park Square, London and was a widow.

At the conclusion of a Remembrance Sunday Service at Aldington chapel in the 1950s, Highfield, Roman Road, Aldington resident Mrs. Gertrude Hooker who was a elder sister of Albert and his brother Frederick, told the compiler of these brief commemorations that Albert and Frederick had enlisted in the army in London together, and the compiler recalls that Mrs. Hooker could instantly still recall both of her brothers’ Rifle Brigade regimental numbers.

Being aware that there are still Aldington residents who are related to Albert and Frederick, it was frustrating to be unable to access either of the Godden brothers service records when the men with the surnames beginning with the letter G, were made available to the general public at the Public Record Office, Kew during the summer of 2003. It would seem that theirs were among those destroyed during or resultant of the German bombing raid during the Second World War.

Albert and Fredericks’ medal roll details show, however, that they initially both served in the 1st Battalion, Rifle Brigade but unfortunately there is no way of ascertaining when it was that Albert had been posted to the 8th (Service) Battalion of his regiment, or the reason for the posting.  It might have been due to having been wounded or taken ill while serving in the 1st Battalion, and simply posted to another battalion having recovered, as was the case with many British soldiers during the Great War.

Germany’s final major offensive on the Western Front during the Great War began on Thursday 21 March 1918 which they gave the code name “Michael.” Compared to the stalemate situations of the years since the commencement of the war, the spring offensive by the Germans was spectacular, mainly due to the amount of seasoned troops which were transferred from the Eastern Front following the disintegration of the Russian army after the October revolution and ultimately signing of the peace treaty on Sunday 3 March 1918. Thirty seven German Divisions with about 6,000 artillery pieces faced only seventeen British Divisions who had 2,500 field guns and howitzers.

The Germans had almost as many reserved Divisions standing by as they had at the front prior to the start of the offensive. In stark contrast supporting the British front line troops there were a mere five reserve Divisions. After bombarding the British lines for four hours on an unparalleled scale, the enemy infantry attacked through a dense fog that was made even more intense by the gun smoke of both sides. Massively numerically superior, the Germans overran the advanced British positions.  After 48 hours the British 5th Army and about half of the 3rd were forced to make a fighting retreat across the devastated open spaces of the Somme.

There is no way of knowing at what point during the battle fought at Flavy on Thursday 23 March 1918, that Albert lost his life. Having survived the bombardments and machine guns at Jussy, Albert and 24 of his fellow riflemen lost their lives that day.

The following is not verbatim but a mere synopsis of what was written by Captain C.E. Squire who had along with Major Young, skilfully and unflinchingly led the detail which provided the covering fire from La Haut Bois, according to Captain Squire when they were assaulted by the enemy during the time spent between Flavy and Cugny, there were only about 130 all ranks of the Rifle Brigade with no other troops at all, of the 130 that the Captain refers too only 60 were members of the 8th (Service) Battalion, with no hand or rifle grenades, only 2 Lewis guns and only a limited amount of small arms ammunition, the small force held in check the huge enemy force from 0800 hours until dark, he then rightly points out that no ammunition was wasted, fire was controlled and that for a period of 12 hours contact with the enemy, three distinct positions were taken up within 400 yards of each other, rather pointedly he notes that “the enemy never more than once dared to attempt a frontal attack, and thus, time was saved while he had to work round the flanks.” In conclusion Captain Squire draws the reader to the fact that it was fresh troops that confronted the Rifle Brigade, with a plentiful supply of ammunition, greatly out numbering the riflemen, adding to the fact that the enemy also “had the support of the artillery, light mortars, rifle grenades and machine guns, it was no disgrace that such a small handful of men had to withdraw the most that we could hope to do was to delay the enemy’s advance so as to give time for the supports to come up behind. “This we did.”

The initial three days of the German 1918 Spring Offensive cost the lives of three soldiers who are all now commemorated on the Aldington, Bonnington & Hurst civic war memorial, Albert being the last of them to lose their lives. 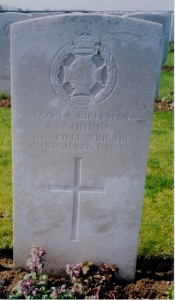 Grand Seraucourt British Cemetery where Albert is at rest was made between 1920 and 1926 during the battlefield clearances by the concentration of graves from the battlefields, and from 25 other burial grounds. There are now in excess of 2,000, Great War casualties and a small number of Second World War casualties commemorated at Grand Seraucourt British Cemetery. Of these, almost two-thirds from the Great War are unidentified and special memorials are erected to two soldiers from the United Kingdom, known or believed to be buried in the cemetery. Other special memorials record the names of 32 United Kingdom soldiers, buried by the enemy, whose graves could not be found. In Plots III, IV and V are many graves, identified collectively but not individually, which are marked by headstones superscribed: “Buried near this spot.”