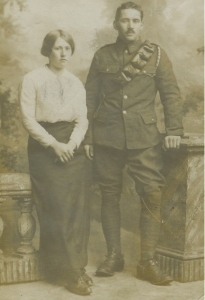 Gorham was born at Butcher Land, Bonnington, Kent on Saturday 11 November of 1893. His parents had married at the parish church of St. Rumwold, Bonnington on Sunday 18 August 1872. Frederick and Elizabeth had eleven children who were baptised at St. Rumwold’s, Gorham’s baptism having taken place on Sunday 4 February 1894. Amongst Frederick and Elizabeth’s children was Edwin Gorham Franks who was baptised on Sunday 18 November 1877, and was only a year old infant when he was laid to rest in the churchyard of St. Rumwold’s on Christmas Day 1878. It was in remembrance of their late son Edwin, that Gorham’s Christian names were chosen by his parents and simply reversed. During his lifetime Frederick Franks who was a Master Carpenter by trade, served for a number of years as the Bonnington Parish Clerk.

Having informed his immediate family that he intended to join the army and hoped to work with horses, Gorham enlisted in the Territorial Force at Canterbury, Kent on Tuesday 16 November 1915 which was five days after his twenty second birthday. When he enlisted Gorham stated that he lived at The Wilderness, Bonnington Hythe, Kent, naming his mother Elizabeth Franks of the same address as being his next of kin, and that he was employed as a Gardener.

Most of Gorham’s initial service was as a Trooper in the 2nd Troop, ‘B’ Squadron, 3/1st Royal East Kent Mounted Rifles with the regimental number 3193. On Monday 12 June 1916 Gorham was appointed a (paid) Lance Corporal. During the summer of 1916 Gorham was stationed with his Squadron at Brown Knoll Camp, Crowborough, Sussex, and on Thursday 10 August 1916 was promoted to the rank of Corporal. Following the losses suffered by the 7th (Service) Battalion, The Buffs (East Kent Regiment) on the Western Front with the British Expeditionary Force, Gorham and several other personnel of the Royal East Kent Mounted Rifles were posted to serve in the battalion on the Western Front from Monday 5 December 1916

Having apparently given the matter much reasoned thought prior to becoming a member of The Buffs (East Kent Regiment), when he arrived at the 38 Infantry Base Depot at the village of Étaples, Pas de Calais, France on Monday 5 December 1916, Gorham immediately submitted an application to relinquish his rank and non commissioned officer status, expressing his desire to revert to the rank of Private, which had probably been written prior to leaving England or during the crossing to France with the date added on his arrival at Étaples. At least two of his superiors asked Gorham to reconsider his application, one of the officers adding that it was thought by his previous Commanding Officer that Gorham would probably be promoted to the rank of Serjeant soon after going to The Buffs, with a marginal comment showing that he and a number of other officers considered Gorham to have ultimately been a likely suitable candidate for a commission.

On Wednesday 13 December 1916 Gorham was posted to the 1st Battalion, The Buffs (East Kent Regiment) whilst still retaining his cavalry rates of pay. Gorham was numbered among the six deaths suffered by his battalion on the day he died, five of whom are at rest in the same row of graves, four including Gorham’s are adjacent to each other. The other casualty 20 year old Private Frank Marchant from of Tonbridge, Kent is at rest at Calais Southern Cemetery.

Gorham’s widowed mother was living at Butcher Farm, Bonnington when she had completed and signed a copy of Army Form W.5080 on Friday 26 September 1919, which was witnessed and signed by the Reverend William Henry Symonds of Bonnington Rectory who had been the Rector of Bonnington since 1918. 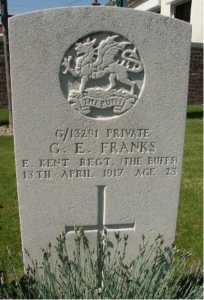 In July 1920 Gorham’s mother received his memorial scroll, but somewhat unusually the bronze memorial plaque (aka Dead Man’s Penny) was not sent with it, the vast majority of the memorial scrolls and plaques were received together. On Friday 2 September 1921 Gorham’s British War Medal and his Allied Victory Medal arrived in the post at Lawson Cottages, Bonnington, where his mother then resided.

One of Gorham’s sisters was Alice Annie Franks who married fellow Bonnington native George Loftus Boulden (1883–1975) at St. Rumwold’s on Saturday 3 October 1908. George employed several local people for many years on his farms whilst heading the company G.L. Boulden & Sons of Aldington.  One of the sons was the late Peter Gorham Boulden who was born on Saturday 14 December 1918. During the Second World War, Peter and his brother Clive were members of the local Top Secret ‘Home Guard Auxiliary Unit.’ Prior to his death in 2005 at the age of 86, during his lifetime amongst his numerous achievements and contributions made to the local area made by Peter, were many years of service as an Aldington Parish Councillor, and  as the representative of the Aldington, Bilsington and Bonnington Ward of Ashford Borough Council between 1973 and 1991, was the Mayor of the Borough of Ashford from 1974 to 1975 and again from 1986 to 1987. Peter was also the Leader of the Ashford Borough Council from 1982 to 1985.

Peter told the compiler of these brief tributes that he was pleased and proud to have been given the Christian name Gorham in memory of his late uncle. The bottom of Gorham’s headstone at Maroc British Cemetery, Grenay, has the following inscription which was chosen and paid for by his parents.

IN THEE O LORD I TRUST