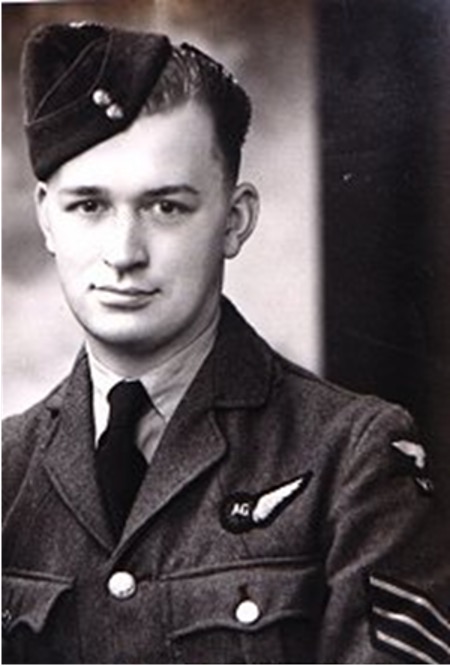 At 1737 hours on Monday 21 December, 1942, Lancaster bomber W4234, “DX-P” took off from its base at Scampton, Lincolnshire, loaded with hundreds of 4lb incendiary bombs and was part of a large force of over 100 Lancaster, Wellington and Stirling bombers that headed for Munich, Germany leaving  from various  bases in Eastern England in the early evening. The crew of “DX-P” consisted of five members of the R.A.F.(V.R.), with the other two crewmen being members of the R.A.A.F. and R.N.Z.A.F. Flying Officer (Pilot) Ronald Bowles, aged 22 from Ealing Middlesex was the pilot, Flying Officer (Navigator) Alexander Mulholland, aged 28 from Aberdeen was the navigator, the flight  engineer was 28 year old Australian Sergeant, Cecil Stubbs from Newcastle N.S.W. Sergeant Maurice Pearman, aged  20 from  Anerley, Kent was the Bomb Aimer, the Wireless Operator and Air Gunner was 22 year Sergeant Arthur Abraham from Coventry, the Rear Gunner was Sergeant Roden B. Pickford from New Zealand who miraculously survived the crash. Completing the crew was the mid upper gunner, John Drain.

The force bombers was detected at about 23.30 ET by the German coastal Freya-radars, which was the sign for the Messerschmitt 110-crews to take off and head toward the skies over Northern France and Belgium. At that stage of the war, these areas were defended by the Gruppen of the Nachtjagdgeschwadern 1 and 4. Several  night fighter aces, including Hauptmann Wilhelm Herget (I./NJG 4) and Leutnant (later Major) Heinz-Wolfgang Schnaufer (II./NJG 1) were searching the skies.

Shortly before midnight the people living in the rural area around Lierde were awakened by short salvoes of 20mm cannons. Only a few had the chance to see how a glowing torch roared towards the earth and ended in a tremendous explosion at the hamlet of Kakebeke at Sint-Maria-Lierde.

It took some time before the first farmers realised that an airmen was lying wounded further down the road. It was the rear gunner, Sergeant Roden B. Pickford from New Zealand. Shocked and dazed Roden was taken prisoner, and once the fire was stopped in the misty morning, the occupying forces took him towards what was found of his dead comrades. Roden had formed a crew with them, which went through some very difficult raids. Joining 57 Squadron in October 1942, they flew towards Cologne and Stuttgart. Being equipped with the Lancaster they crossed the Alps several times to bomb the cities of Genoa and Turin.

Hauptmann Wilhelm Herget of (I./NJG 4) and Leutnant Heinz-Wolfgang Schnaufer of (II./NJG 1) and their crews claimed to have shot down Lancaster bomber W4234, “DX-P.” Claims for ‘kills’ by Luftwaffe aircrews were rigorously scrutinised before being credited with them by the Luftwaffe Headquarters staff at Berlin, which ordered both crews to toss a coin and Herget won. None of them ever saw the terrible effects of their acts. Fritz Rumpelhardt, who was Schnaufer’s radar operator, only visited the first kill they made. The sight of it made them never to return to their victims. Both Schnaufer and Herget survived the war, respectively scoring 121 and 73 victories.

After the compiler of these brief commemorations had studied relevant British & German data about the loss of Johns’ aircraft from about 1977, and coming to the conclusion that it was in fact Heinz-Wolfgang Schnaufer and his crew that had shot it down. It was good to see that former Bomber Command Navigator Peter Hinchliffe, O.B.E. in his book Schnaufer: Ace of Diamonds which was published in 1999 came to the same conclusion.

Officially credited with 121 confirmed aerial victories Heinz-Wolfgang Schnaufer remains the most successful night-fighter ever, and bearing in mind how modern wars are now fought, he will probably always remain so. Unlike many of his peers, he survived the Second World War and eventually returned to the Schnaufer family wine business. His end came when, during a wine-purchasing visit to France, his open top sports car was in collision with a lorry on the main road south from Bordeaux. The lorry had failed to observe right of way and entered the main road illegally. Heavy gas cylinders from the lorry fell on to Schnaufer’s car, at least one of them hitting him on the head. He died in hospital on Saturday 15 July 1950, two days after the accident. 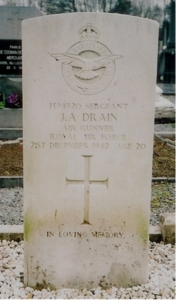 In May 2000, an impressive monument was inaugurated near the crash site of Johns’ Lancaster, in the form of a stèle with seven original 4lb incendiary counterweights which were found during the recovery operation. Each of these stands for one of the crew. They were also represented by the relatives of several members of the crew – including Roden Pickford’s, who unfortunately had passed away a few years before.