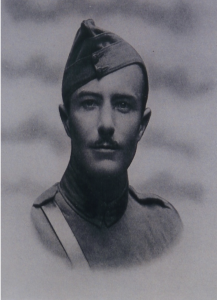 Norman was born at 46 Osnaburgh Street, Westminster, London, N.W. (off Euston Road) on Sunday 2 August 1891, and baptised at the parish church of Christ Church, Albany Street, Camden, London on Sunday 11 October 1891, at which time the family was residing at the above address, and his father was a Cabinet Maker. He had a sister Gladys Etta Pomeroy, born in 1896 at St. George Street, Hanover Square, London W1. and step-sister Amelia Jane Pomeroy. Norman and Gladys were both the children of the second marriage of their father Edward Pomeroy, who was a native of Clifton, Bristol; who had first married at Pancras, London in 1877, and married Julia Charlotte Rausch also at Pancras, London in 1885.  At the time of Norman’s birth, the family name was Pomeroy which has caused some interesting research into his army career etcetera, as ‘de’ is not recorded in any of his documentation or in the General Register Office files, Census Returns and the like, all of which have been consulted in order to glean information about Norman. By far and away most of the information about Norman obtained by the compiler, was provided by Normans’ sister and his regular motorcycle pillion passenger Miss Gladys Etta de Pomeroy.

Along with a number of other employees of British Thomson-Houston Co. Ltd. Norman enlisted in the Territorial Force in August 1914, and was attested as a Driver, 192 in the 1/5th Warwickshire Howitzer Battery, 4th South Midland (Howitzer) Brigade, Royal Field Artillery. He served initially at Great Baddow, Essex, then spent on Sailsbury Plain, during which time Norman was employed with his battery as a telephonist from Thursday 27 August 1914.  During his time with the Howitzer Battery under the command of Major C. P. Nickalls, R.A., Norman served on the Western Front with the British Expeditionary Force ( Wednesday 31 March 1915) until being invalided home on Thursday 27 August 1915, suffering acute eczema & blood poisoning. He was commissioned as a Second Lieutenant attached to the General List on Thursday 28 December 1915, following his application for appointment to the Royal Flying Corps on Saturday 30 October 1915. On the successful completion of his flying training Norman achieved his goal, passed the requisite course for a Royal Flying Corps Pilot, and gained his flying certificate (No. 2346) piloting a Maurice Farman Biplane at Brooklands Military School, Weybridge, Surrey on Friday 28 January 1916.

All Brigades were carrying out reconnaissance patrols along the front on Friday 20 October 1916. Norman’s aeroplane was one of six F.E. 2b machines of 11 Squadron, R.F.C. engaged by the 3rd Army to take photographs in the area of Douai and along the River Scarpe. Norman had taken off from Filescamp Farm, Izel-le-Hameaux at 0815 hours,  his machine having the number 4867 was not the usual machine that he and his Observer, Sunderland native, Second Lieutenant William Black R.F.C. formally of the 7th (Service) Battalion, Durham Light Infantry, are noted to have used. Over the town of Douai, Norman aerial formation came under heavy anti-aircraft fire, though all machines survived.  They were soon spotted by enemy aircraft who tailed them and were re-enforced by approximately ten more machines from the direction of Arras.  With the arrival of their formation, the German pilots had an advantage of 2 to 1 as well as superior aircraft specification.  Of necessity, the British pilots and observers had to engage the enemy in a fight and gave a good account of themselves. Unfortunately the Germans who had engaged Norman and his comrades were of those of Jasta 2, which had some of the most successful pilots of the Imperial German Air Force, including Oberleutnant Erwin Böhme who prior to his death over Zonnebeke, Belgium on Thursday 29 November 1917 was credited with 24 confirmed ‘kills,’ Norman having been his fourth.

Norman was buried with full military honours by personnel of the Imperial German Air Force at Les Fosses Farm where he crashed, which is situated South West of Monchy-le-Preux on the edge of the South side of the Feuchy Chapel to Cambrai road. When he was buried, the German airmen erected the propeller from Normans’ machine to form a cross, and carved on his propeller the inscription:  HIER RUHT DER ENGLISCHE FLIEGE NE DE POMEROY Td 20.10.16 No. 29847  R.I.P. 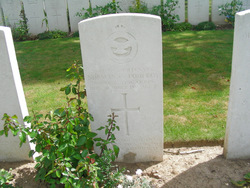 His original grave was lost, but was subsequently found by a army Padre and moved to Cagnicourt British Cemetery, where he was again accorded full military honours as befitted his rank.

When Norman was killed, it seems that an act of self-preservation was undertaken by William Black.  Despite being wounded, he tried to climb back into the pilot’s cockpit in an attempt to take control of the FE2b; unfortunately, or perhaps fortunately, he fainted during his attempt.  Despite being in such a flimsy aircraft and a flat spin from 10,000 feet, William survived the impact which broke his leg and completely wrecked the machine. William received immediate medical attention from German soldiers, and becoming a Prisoner of War, and continued to receive treatment at the Reserve Lazaratte (Hospital), St. Clotilde, Doual. Due to his injuries and not considered fit for further military service, William was repatriated to Switzerland via the Red Cross on Thursday 27 December 1917, returned back to England on Friday 14 June 1918.

Despite the injuries he had received on Friday 20 October 1916, which among other things had resulted in him have one leg shorter than the other, William Black voluntarily reenlisted in the Royal Air Force during the Second World War and was given his former rank, but was confined to desk duties. Having survived both world wars, William was recorded as being 86 years of age when he died in hospital in Edinburgh on Tuesday 12 January 1982, and was laid to rest at the churchyard of Cramond Kirk, Cramond, Lothian, Scotland.