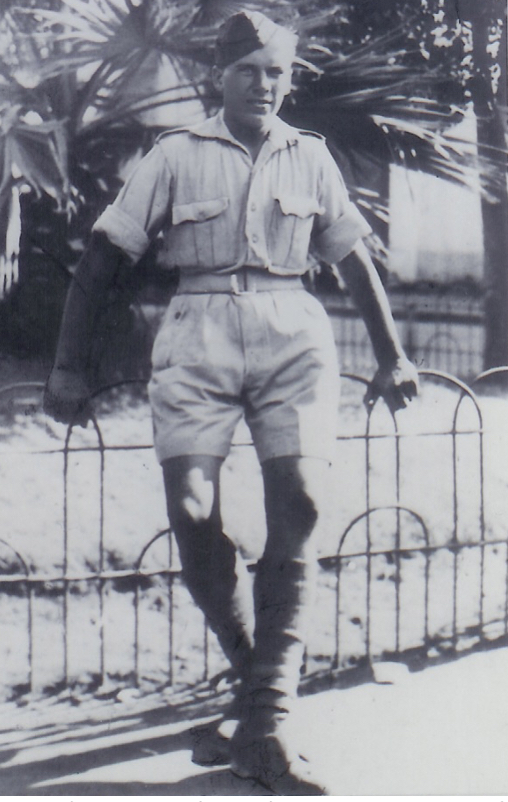 Derrick was born at Chevening, Kent on Saturday 17 February 1923 at which time his father was employed by the West Kent Hunt. Prior to enlisting in the Royal Marines on Monday 17 April 1941, unlike other members of his family he was not employed by a Hunt nor participated in equestrian pursuits, and was employed by Noël Peirce Coward as a Gardener at Goldenhurst, Aldington.

His period of initial training in the Royal Marines was undertaken at H.M.S. Pembroke, Chatham, Kent which was a shore based training establishment.  Whilst based there he also spent time in and around other Medway locations, notably within the Chattenden military training area complex. Following the successful completion of his recruit training Derrick was posted to the Mobile Naval Base Defence Organisation (MNBDO) 1. The 23 Light Anti-Aircraft Battery, Royal Marines, was a sub-unit of the Mobile Naval Base Defence Organisation 1.

Derricks’ brother Ernest, or ‘Joe’ as he is known, was asked by the compiler several years ago what he know about his brothers’ death.  ‘Joe’ said that the last time he saw his brother, he was himself serving as a Corporal in the Royal Army Service Corps. On boarding a troopship at the port of Alexandria, he and Derrick, who was on the dock, spotted each other simultaneously and waved to each other. 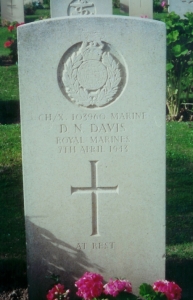 Derrick is erroneously commemorated by the Commonwealth War Graves Commission as serving in the 23rd Light Anti-Aircraft Regiment, Royal Marines, at the time of his death, when he was accidentally drowned at Western Beach, Abourkir Bay (now Abū Qīr Bay), near Alexandria, Egypt.   This, in itself, made more so by the fact that Derricks’ death was an excellent swimmer from a very early age.

Following the many costly lessons learned during the Great War, a vast and varied range of recommendations for changes and improvements were put forward by politicians, senior civil servants and officers from all branches of the armed services following the cessations of hostilities; thousands of new ideas ranging from the patently obvious to the bizarre were broached during the time spent formulating the changes. ‘X’ Organisation was the forerunner of the MNBDO units,  one of the accepted new innovations, which was formed during the autumn of 1923 and based at Fort Cumberland, Eastney, Hampshire.  Several experiments and trials were undertaken during the early days of ‘X’ Organisation, based more on brute force and determination than finesse and expertise, such as landing guns and other heavy equipment over piers constructed from scaffolding and other Herculean tasks.

In July 1936, authorisation was then given to increase the manpower. Personnel were drafted into the unit, with the old hands training the new men. In 1938 several men were posted out to bring fleet detachments up to war-strength but this was sensibly later stopped and the nucleus was then organised into eight Anti-Aircraft Batteries to assist in the defence of Portsmouth.

In peacetime, Britain has always struggled to prioritise spending on armaments and armed forces, putting pressure on military planners in time of war and leading to many units needing to compromise. This would seem that the case for the MNBDO where Derrick was destined to serve, who leading up to just before the start of the Second World War lost of guns and equipment when 14 of their 20 anti-aircraft guns and coastal guns were sent to the Royal Artillery.

Approval for the formation of MNBDO 1 was granted on Tuesday 12 September 1939.  All those who had remained at Fort Cumberland were posted to it and, with another war looming, a war establishment of 568 all ranks was agreed pre formation on Wednesday 17 May 1939. This was rapidly reviewed following the outbreak of hostilities to be comprised of 78 officers and 2,150 other ranks, but, as with all other formations, the designated equipment allotted to the unit was in woefully short supply; only an eighth of the allocation of 48 searchlights were initially supplied,  17 of the 75 promised vehicles arrived in a pattern that applied to all equipment allocated and manning. The unit was not fully at war strength until 1940.

In August 1939 a battery of eight 3.7 inch guns was formed and sent to Alexandria, Egypt with men from the units nucleus in addition to 100 men from various other fleet posts, who in turn had their places filled by recalled reservists during which period the units strength was 264 all ranks of which 175 manned the anti-aircraft guns in Alexandria, one of whom was Derrick.