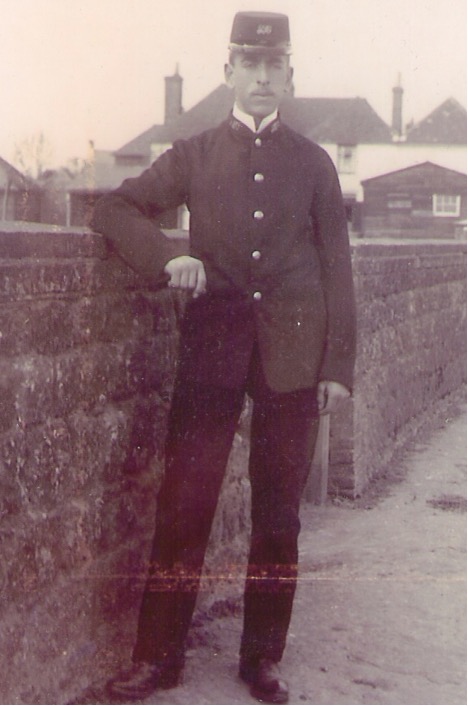 Of all the servicemen from Aldington, Bonnington and Hurst (or elsewhere) who failed to return from either of the two world wars, by far and away the easiest for the compiler to research over the last 65 years has been Henry Cuttress. It is probably fair to say that the compilers interest and concerns about all war deaths and their remembrance has all originally emanated from the death of Henry.

My late parents, my brother and I, had all lived at Mount Pleasant, Mill Road, Aldington with William and Maud Cuttress until William died on Tuesday 11 May 1965, it being the day after his birthday, his wife having predeceased him by 16 years. During our time together as an extended family unit I had asked William about his brother, Henry, on a number of occasions.

Henry had been a member of Aldington Cricket Club, and the Aldington Goal Running Team and in view of the latter sport he must have been quite fit.

Prior to enlisting in the army Henry was employed by the General Post Office as a Postman. Having passed his army medical examination at Canterbury on Tuesday 22 August 1916, it was found that he had bad teeth on the right hand side and that he was suffering from a Hernia. Henry enlisted in the army at Ashford, Kent on Thursday 21 September 1916 ‘For the Duration of the War,’ expecting to become a member of The Buffs (East Kent Regiment). On the day following his enlistment Henry was attested to serve in the Army Ordnance Corps (New Force) at Woolwich as Private 023208.

On Monday 9 April 1917, having been given the new regimental number 65266, he was then transferred to the 106th Battalion, 24th Reserve Brigade, Training Reserve based at Edinburgh, Scotland.  Whilst he was serving at Edinburgh Henry reported sick ( Tuesday 29 May 1917), and later the same day he was hospitalised for a fortnight suffering with a form of Gastritis. After training at Edinburgh, Henry was posted to the 6th (Service) Battalion, The Buffs (East Kent Regiment) with the regimental number G/14018, and remained this battalion until his death.

In retaliation to a raid on enemy trenches by personnel of the Royal Sussex Regiment, German 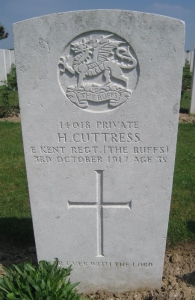 artillery shelled the 37th Brigade, 12th (Eastern) Division front line near the Pas de Calais village of Wancourt. The 7th (Service) Battalion, Royal Sussex Regiment suffered no fatalities during the retaliatory shelling, but Henry’s battalion had 33 casualties inflicted, including one officer and nine other ranks killed, one of whom was Henry, whose deaths as recorded as Wednesday 3 October 1917.