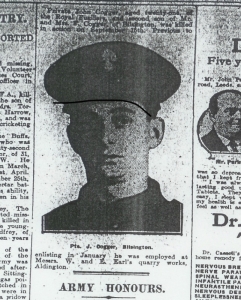 Commemorated on the Thiepval Memorial, Somme, France. Pier and Face 8 C 9 A and 16 A as shown above left, and on the Great War memorial plaque in the parish church of St. Peter & St. Paul Bilsington, Kent, also in the former Wesleyan Chapel, Mersham, Kent as shown above right.

John was born in Bilsington, Kent and his birth was recorded in the East Ashford, Kent, Registration District during the second quarter of 1895.  At the time of the 1901 census the Cogger family resided in Frith Road, Bilsington. Johns’ father Frederick Cogger, who was a 38 year old native of Ticehurst, Sussex was employed as a General Labourer. By the 1911 census John, then 16 years old, was recorded as being employed as a Farm Labourer and his family lived at Beehive Cottage near the Frith, Aldington, which is situated on Priory Road. Johns’ father was still recorded as being the head of the house and employed as a Farm Labourer.

When John had enlisted in the army ‘For the Duration of the War’ at Ashford in January 1916, he gave his place of residence as Aldington Frith, from which it would appear that he was still living at Beehive Cottage. Prior to enlisting in the army John had been employed as a Quarryman working for W. & E. Earl in their Kent ragstone quarry at Aldington, as were several men that served in the armed forces during the Great War.

The Medal Index Card for John is not very useful re trying to ascertain his date of arrival on the Western Front for service with the British Expeditionary Force. It does show that when he had first served on the Western Front, John was serving as Private, G/24324 in the Royal Fusiliers (City of London Regiment), but no battalion is recorded.

The 32nd (Service) Battalion, (East Ham) Royal Fusiliers (City of London Regiment) in which John was serving when he lost his life, was raised by the Mayor and Borough of East Ham on Monday 18 October 1915. Prior to raising the battalion, the Mayor of East Ham had already raised a number of artillery brigades which led to his conviction that a whole battalion of infantry could also be raised, to that end he consulted with Major F. Cannon who was at the time the recruiting officer at East Ham and Barking, following their consultations the Mayor wrote to the War Office outlining his proposal for the raising of an infantry battalion early in October 1915, the reply to which, whilst approving his idea had a proviso attached to it, which required the Mayor to secure 600 men before Christmas to form the new battalion, and that failure to do so would result in approval being withdrawn.

After it had been serving in the Ploegsteert, Comines-Warneton, Hainaut, Belgium area, Johns’ battalion arrived at the Somme village of Bellancourt on Thursday 24 August. On Friday 15 September 1916 along with the rest of the 124th Brigade, the battalion was in trenches to the north east of Delville Wood on the outskirts of the village of Longueval, at which time the wood itself had only been in allied hands for less than a fortnight, officially, the battle for it had ended after seven weeks of intense fighting on Sunday 3 September 1916.

On the day of Johns’ death, the 32nd (Service) Battalion, (East Ham) Royal Fusiliers (City of London Regiment) took part in an attack commencing at 0620 hours whilst supporting the 10th (Service) Battalion, The Queen’s (Royal West Surrey Regiment), (Battersea). There is a prominent ridge which runs from Delville Wood to Thiepval to the west, it crosses the D929 road between Albert and Bapaume. At the end of the action of Friday 15 September 1916 all German positions from the wood to Mouquet Farm, (nicknamed Monkey Farm) which is located between Thiepval and the D929, had been successfully captured and held by the attacking force. The distance along the ridge between the two points is approximately five miles, as such the attack which had been carried out was not only successful, but of quite notable significance; the operation had begun a full thirty-six hours before the time that the infantry commenced their advance.  The German trenches were subjected to a series of barrages by the guns of the Royal Artillery, the last of which was with the infantry following close behind the dropping shells, and all leaving their starting positions at 0620 hours. Johns’ battalion was in the 41st Division. , Allotted to the division for the advance were three tanks, the day being very significant by their appearance, as it was the first time that tanks had ever been used in warfare. It was also the first day that both the 26th (Service) Battalion Royal Fusiliers (City of London Regiment) (Bankers) and Johns’ battalion had been called upon to take part in any action of real magnitude. German field guns for once were not so quick off the mark, but as soon as they too started shelling it was not only in an attempt to silence the British gunners, but also to try and inflict losses amongst the attacking infantry formations and the supporting tanks.

At the conclusion of the day, the 32nd (Service) Battalion, (East Ham) Royal Fusiliers (City of London Regiment) Casualty Roll included 10 officers wounded, and 28 other ranks killed in action, 168 other ranks wounded, plus a total of 87 other ranks being posted as missing, one of whom was John. Inevitably with the passing of time, a clearer and more accurate figure appertaining to the number of fatalities shows that John was numbered amongst 90 members of his battalion who had died on Friday 15 September 1916, of whom 67 have no known graves and are all commemorated on the Thiepval Memorial to the Missing of the Somme. Initially John had been numbered amongst the 87 other ranks in his battalion who were posted as missing, but subsequently the Army Council at the War Office made the decision that for official purposes it was to be assumed that he had died on or after 15 September 1916.