George was born in Aldington on Sunday 2 August 1885. He re-enlisted in the army in Ashford on Thursday 9 December 1915  ‘For the Duration of the War, with the Colours and in the Army Reserve. When he enlisted, George stated that he was 30 years and 129 days old, employed as a Viceman by the South Eastern & Chatham Railway Company, and that he resided at 103, Gladstone Road, South Willesborough, Ashford, Kent, naming his father of the same address as being his next of kin. He also stated that he had previously served in the 5th (Territorial Force) Battalion, The Buffs (East Kent Regiment) from which he was discharged on Saturday 15 February 1913 at the termination of his engagement.

Having been placed on the Army Reserve, George was mobilized for war service on Monday 20 March 1916, and posted to No.1 (Heavy & Siege) Depot, Royal Garrison Artillery at Derby, Derbyshire where two days later he was attested to serve as a Gunner in the Royal Garrison Artillery. On Tuesday 4 April 1916, George was posted to 21 Company, Royal Garrison Artillery in which he served until Tuesday 28 November 1916 at which time he was posted to the 293rd Siege Battery, Royal Garrison Artillery. Like George, all of the personnel of the 293rd Siege Battery at the time were also freshly posted to it as the Battery had only come into being on Wednesday 1 November 1916 when it was formed at Leith as an Independent Battery. Only a couple of weeks were spent by George north of the border as along with the rest of his Battery he moved sough to Ewshott  Camp, Aldershot, Hampshire being billeted there from Wednesday 13 December 1916. On or about Monday 15 January 1917 the Battery made the short trip to the Aldershot Siege School, where the other ranks were accommodated in “G” Block at Tournai Barracks, staying at the school for nearly a month. Another significant move for George and his Battery took place on Monday 5 March 1917 when the move to Codford on the edge of Salisbury Plain took place, whilst at Codford four 6 inch 26 cwt Howitzers, were issued to the Battery, it was at Codford that notification was received of a move to France by the Battery.

Battery undertook live firing on the ranges in Lydd from Tuesday 13th March 1917 in preparation for going into action and it would be nice to think that George paid a visit to his parents Charles and Kate Burch.  If George did manage a 48 hour pass or similar to visit his family, it would have been the last time that he saw them.

On Friday 30 March 1917, George sailed from Southampton, Hampshire for service on the Western Front with the British Expeditionary Force, and the following day disembarked at the bustling French port of Harve, Seine-Maritime. 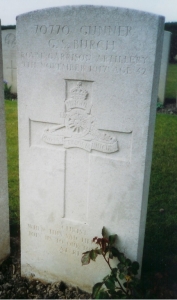 George has the sad distinction of being the sole casualty suffered by the 293rd Siege Battery, Royal Garrison Artillery when he was killed in action on Friday 9 November 1917.

On Saturday 6 December 1919, Georges’ father Charles Burch completed a copy of Army Form W.5080 in order for him to be provided with a bronze memorial plaque (aka Dead Man’s Penny) and accompanying certificate in memory of George. The form was witnessed by Clergyman, the Reverend H. Blake of 105, Gladstone Road, South Willesborough, Ashford, Kent.

The bottom of Georges’ headstone at Bard Cottage Cemetery, Boezinge has the following inscription which was chosen and paid for by his parents.