Of the Second World War casualties, Robert, who was always know by all and sundry as Bob, has been the easiest casualty to research, due to the fact he was an uncle of the compilers wife. 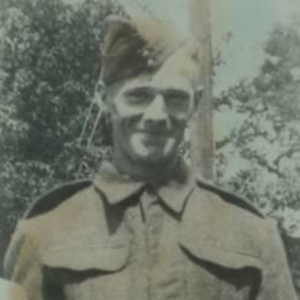 Robert was born in Aldington on Tuesday 5 October 1915, where he attended the village school and is recalled by several of his peers as being very bright but a bit of a joker. Prior to joining the army he was employed by his father Charles in the family building firm C. Brooks & Sons.

Roberts’ father, Charles, had served in a number of regiments during the Great War, mostly on the Western Front, and like everybody else who served there, had witnessed the horrors of war and loss of life. As a result, Charles insisted that his sons chose different regiments or corps in which to serve, in order to minimise the risk of them serving and dying together.

Robert enlisted in the army on Thursday 13 June 1940. After completing his basic training,  all of his service was in the 1st Battalion, Oxfordshire and Buckinghamshire Light Infantry, which prior to being posted to France, included service in England and Northern Ireland. He was admitted to the Military Hospital, Shaftesbury, Dorset on Sunday 22 August 1943 where he remained until Tuesday 14 September, when he was then transferred to Little Bathampton Auxiliary Hospital, Wiltshire.

Most of the events concerning Roberts’ regiment participation in the Battle of Normandy focus on the 2nd (Airborne) Battalion, which had a role as glider troops led by Major John Howard, D.S.O. and captured what is now known as Pegasus Bridge on the night of 5-6 June 1944.

Robert and his battalion it landed in Normandy at 1414 hours on Sunday 25 June 1944. On Wednesday 5 July during the Battle for Caen, he received a mortar wound to his right thigh that resulted in him being evacuated back to England the following day. From Wednesday 12 July until Thursday 18 July, Robert received treatment for his wounding at Walton Hospital, Liverpool, and was granted 7 days leave on being discharged from the hospital.

At the completion of his leave, whilst waiting for his train at Ashford railway station, Robert told his sister Molly that he would not be coming home as it is “hell over there.” 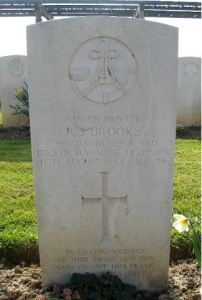 Sadly his prediction proved to be correct, as Robert is numbered among the casualties of his battalion who fell on Sunday 13 August 1944 and the following day, that were buried at the commune of Saint-Laurent-de-Condel in the Calvados department of Normandy. Their graves were moved to Banneville-la-Campagne War Cemetery on Tuesday 2 October 1945, by personnel of “G” Section of the 48 Graves Concentration Unit which was commanded by a Major serving in the Royal Artillery.

On the misty morning of Sunday 13 August 1944 Roberts’ battalion approached a farmhouse situated at La Bijude crossroads near Falaise, where as the mist partially cleared the battalion and the Germans were revealed to each other. The enemy soldiers that Roberts’ battalion encountered included two tiger tanks supported by Panzer infantry. During the intense engagement, Robert was hit a number of times by bullets fired from a Mauser Maschinengewehr 42 (machinegun), and killed instantly.

The bottom of Roberts’ headstone has the following inscription chosen by his parents.

IN LOVING MEMORY OF OUR DEAR SON BOB. 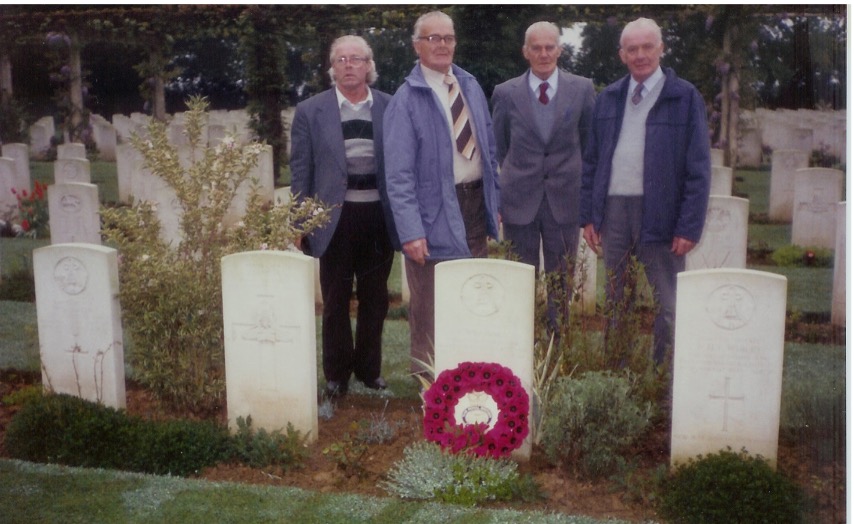 Brothers and army veterans, Richard, David, Charles and William Brooks at the grave of their late “Bob” at Banneville-la-Campagne War Cemetery in Calvados, France.