Depending on which data sources are accessed Cecil is surname spelt either Brooks or Brookes, the former being correct. In June 1920 the 1914-15 Star, to which Cecil had been entitled, was returned by the Brooks family to the issuing office for correction of the misspelt surname; Brookes.

Cecil was born at Court-at-Street, Lympne, Kent and his birth recorded in the Elham, Kent Registration District during the third quarter of 1894. He was baptised at the parish church of St. Stephen, Lympne on Sunday 2 September 1894.  He attended Aldington School, and subsequently at Clarks College, London. Upon leaving Clarks College, Cecil was employed as a assistant by grocer, Philip Harrington at 37 Mount Ephraim, Tunbridge Wells, Kent.

Cecil enlisted in the army at Tonbridge, Kent on Monday 26 April 1915 ‘For the Duration of the War,’ and was attested the following day at Maidstone, Kent to serve as a Private in the Queen’s Own, (Royal West Kent Regiment). At the time of his enlistment Cecil stated that he was 20 years and 270 days old, had resided at 44 Mount Ephraim, Tunbridge Wells, Kent, and was employed as a Clerk. He named his father Herbert Brooks of 49 Hunter Road, Willesborough, Ashford, Kent as being his next of kin. 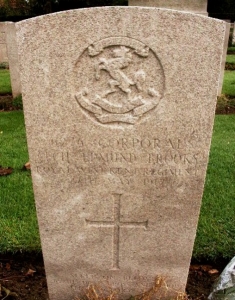 commission. At the time of his death Cecil had spent over eighteen months on the Western Front battlefields, and was killed on the eve of being commissioned a Second Lieutenant in his regiment. One of Cecil’s officers wrote the following letter of condolence to his mother; “He was calm and cheerful under most trying circumstances, he inspired the confidence of all who knew him. I know how inadequate our sympathy may seem in your great loss; yet I feel sure you will derive some benefit that your son died as only an English gentleman can do —doing his duty.”

On Thursday 31 July 1919 Cecil’s mother completed a copy of Army Form W.5080 in order for her to be sent a bronze memorial plaque (aka Dead Man’s Penny) and accompanying certificate. The form was witnessed by W.H. Ward, J.P. of 24 High Street, Ashford, Kent. 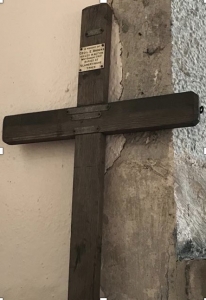 The original wooden grave marker of Cecil shown above right, is now on proud display in the parish church of St. Mary the Virgin, Willesborough, Kent, it being among only 24 that are known to exist in Kent.

The bottom of Cecil’s headstone at Vlamertinghe Military Cemetery has the following inscription which was chosen and paid for by his parents.

BY HIS DEAR CROSS AND BLOOD THE VICTORY WON