Commemorated on the Chilham, Kent civic war memorial which is located in the churchyard of the parish church of St. Mary, and in The Buffs Book of Life in the Warriors Chapel at Canterbury Cathedral.

Samuel was born in Aldington on Saturday 24 October 1885.

At the time of Samuels’ death at St. Omer due to wounds, he was serving in the army as a recalled Reservist, having originally enlisted in The Buffs (East Kent Regiment) at Canterbury, Kent on Tuesday 27 September 1904, signing for 9 years’ service with the Colours and 3 years in the Army Reserve. As he had requested, he was attested to serve in The Buffs (East Kent Regiment) as regular soldier. The time Samuel spent serving in his chosen regiment resulted in postings to South Africa, Hong Kong, Singapore, and India. Samuel returned to the United Kingdom on Sunday 1 February 1914 on the completion of his overseas postings, and was discharged from the regular army but with commitments to serve in the Army Reserve.

During the short time Samuel spent as a civilian until being recalled for serve with the Colours at the commencement of the Great War, he was employed as Quarry Labourer at a shingle and sand quarry in the Stour Valley at Chartham, Kent, where he had the unfortunate experience of having to quickly extricate his brother when he was engulfed by a large pile of extracted shingle that had slipped.

At the  start of the Great War the 1st Battalion, The Buffs (East Kent Regiment) was stationed at Fermoy, County Cork, Ireland and was in the 16th Brigade, 6th Division. It left Ireland for England on Wednesday 12 August, arriving at the city of Cambridge on Wednesday 19 August where it was billeted at Christs Hospital.

Following his recall to the Colours, Samuel embarked on the 13,453 ton SS Minneapolis at the port of Southampton with the 1st Battalion, The Buffs (East Kent Regiment) on Monday 7 September. The ship, which was owned by the Atlantic Transport Co., Ltd., Belfast, docked at the French port of St. Nazaire the following day, it being the first day of Samuels’ service on the Western Front with the British Expeditionary Force.

The loss of Samuels’ army service papers combined with the fact that the names of British army Great War other ranks who died were not usually recorded in the relevant war diaries, means that the compiler has been unable to ascertain for certain, where it was that Samuel suffered the wound that led to his death at St. Omer. The date and the actions fought by his battalion prior to same, lead the compiler to surmise that it was probably at the commune of Radinghem, Pas de Calais, France, where on Tuesday 20 October 1914 the 1st Battalion, The Buffs (East Kent Regiment) suffered 51 fatalities, all of whom have no known graves and are commemorated on the Ploegsteert Memorial in Berks Cemetery Extension, Ploegsteert, Hainaut, Belgium.

In addition to those in Samuels’ battalion who fell of Tuesday 20 October 1914, a not insignificant number of soldiers were wounded, some seriously, all of whom would been speedily evacuated from the front to medical facilities at various locations including the town of St. Omer where Samuel is at rest.  This was the General Headquarters of the British Expeditionary Force from October 1914 until March 1916. Field Marshal Frederick Sleigh ‘Bobs’ Roberts, 1st Earl Roberts, V.C., K.G., K.P., G.C.B., O.M., G.C.S.I., G.C.I.E., K.St.J., V.D., P.C., F.R.S.G.S. was 82 years of age when he died at St. Omer on Saturday 14 November 1914, and is at rest in St. Pauls’ Cathedral, London.

During the Great War the town of St. Omer was a considerable hospital centre with the 4th, 10th, 7th Canadian, 9th Canadian and New Zealand Stationary Hospitals, the 7th, 58th (Scottish) and 59th (Northern) General Hospitals, and the 17th, 18th and 1st and 2nd Australian Casualty Clearing Stations all stationed there at some time during the Great War.  St. Omer suffered German air raids in November 1917 and May 1918, both of which resulted in serious loss of life. 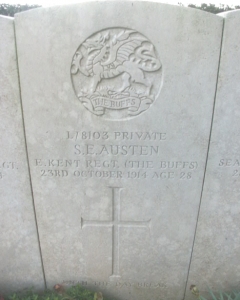 The cemetery where Samuel and fellow Aldington native FRANK ABEL BARLING are both at rest, takes its names from the triangular cemetery of the St. Omer garrison, properly called the Souvenir Cemetery (Cimetiere du Souvenir Francais) which is located next to the War Cemetery. The Commonwealth section of the cemetery contains 2,874 Commonwealth burials of the Great War of which 6 are unidentified, with special memorials commemorating 23 men of the Chinese Labour Corps whose graves could not be exactly located. Second World War burials number 403, (93 unidentified). Within the Commonwealth section there are also 34 non-war burials and 239 war graves of other nationalities. Chosen and paid for by his parents, the bottom of Samuels’ headstone at Longuenesse (St. Omer) Souvenir Cemetery has the following inscription:-

UNTIL THE DAY BREAK 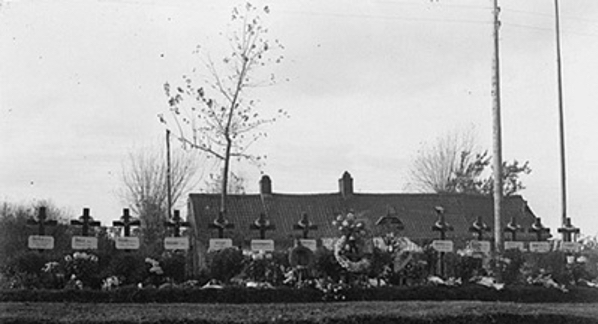 Original grave markers at the cemetery where Samuel Austen & Frank Barling are both at rest.
The photograph of Samuels’ headstone shown above is courtesy of Liam J. Scullion.