Local resident David Hughes worked tirelessly for decades for a tribute to the 49 men and one woman of Aldington, Bonnington and Hurst who died during both world wars to be built in Aldington. He was quoted by local TV as saying that his campaign to build a War Memorial in the village began on 11 November 1950 when, at the age of seven, he was approached by a family from London looking to lay flowers on the village war memorial. He told them that Aldington did not have one and, instead, led them to a plaque in the local chapel, where the family told him that their deceased relative was not listed. “I knew then that Aldington should have its own memorial,” he said.

David later discovered there were 23 names missing from the church and chapel plaques because they, or their families, did not regularly attend local places of worship.

His dream was realised in July 2016 when, on the day after the centenary of the start of the Battle of the Somme, in which many of Aldington’s servicemen were lost, a ceremony was held to unveil the Aldington War Memorial.

The 9ft-high monument shaped as an “A” was designed by Phil Cowell, who then lived in Quarry Wood, and is made from Kent ragstone and Bethersden marble, a hard, decorative stone found in and around the Ashford area. Both the stone and the marble were donated by Martin Boulden, then Chair of the Parish Council, who was approached by David for support and suggested the dressed stone might be suitable, given Aldington’s historic link with ragstone quarrying. All the stone was retrieved from various locations on land he farms. The ragstone was the remains of an 1830’s barn that had been damaged by fire. Ragstone has historic significance given the quarrying that took place in Aldington and was one of the main local industries, aside from farming, at the beginning of the 20th Century. 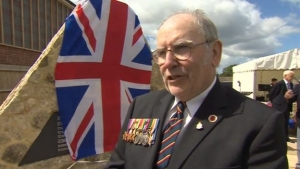 David Hughes is a life-long military enthusiast. Together with Neil Clarke and Kyle Tallet he co-authors The Kent War Memorial Transcription Project (http://www.kentfallen.com) which is Kent’s largest and most comprehensive online civic war memorials commemoration website. It covers all Kent boroughs, districts and parishes and including South East London (GLC) boroughs that were still part of Kent in the 1920’s. David continues to help families trace the military history of their relatives to this day. We are most grateful to David for sharing the histories of each of the Aldington and Bonnington casualties that are commemorated on the War Memorial.