On Monday EDF Energy presented a project proposal to the Parish Council.  It involves the creation of a large solar farm on land to the west and south of the converter station and current solar farm on Church Lane, as... 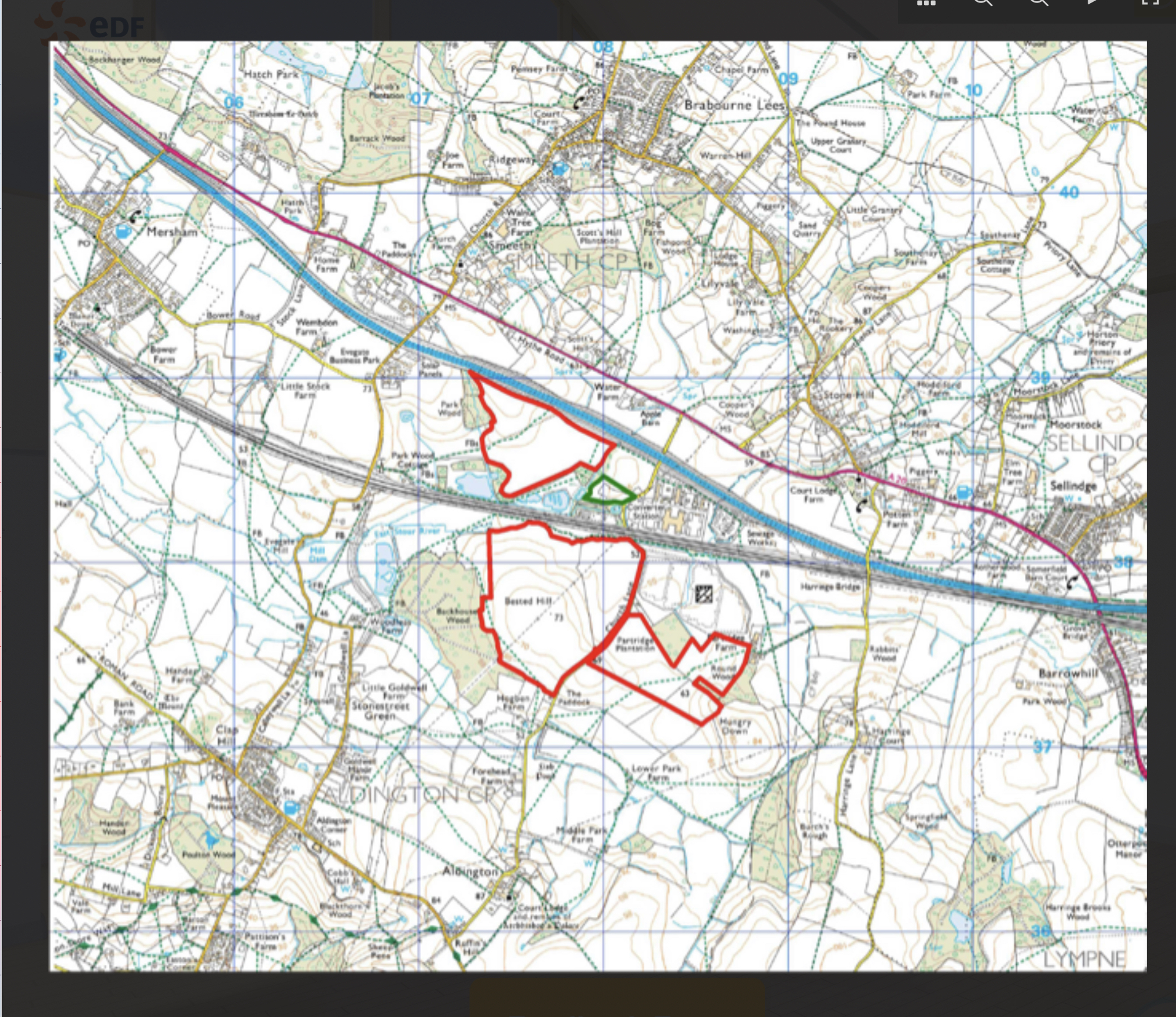 On Monday EDF Energy presented a project proposal to the Parish Council.  It involves the creation of a large solar farm on land to the west and south of the converter station and current solar farm on Church Lane, as outlined in red above.  The land outlined in green is proposed to be a battery storage site and will be subject to consultation in the future, but is included here to give residents a complete picture.

It is our understanding that this is a first round of public consultation. You can view a virtual public exhibition and take part in Q&A sessions this Saturday 17 July, 2:00pm and on Thursday 22 July, 7:00pm or visit an exhibition online at the project website: www.edf-re.uk/renewables/east-stour
If you do not have internet access and would like to view hard copies of the materials, please contact the EDF team using Contacting us directly on east.stour@edf-re.uk or 0800 0194 57
The developer is currently collecting feedback and intends there to be a second round of public consultation in the Autumn, ahead of a formal planning application, which, if approved, will lead to a 9 month build and an operational site sometime late 2022/early 2023.
https://abpc.org.uk/wp-content/uploads/2020/06/aldington-and-bonnington-logo.png 0 0 Linda Harman https://abpc.org.uk/wp-content/uploads/2020/06/aldington-and-bonnington-logo.png Linda Harman2021-07-14 11:44:342021-07-14 11:47:16Proposal for solar farm off Church Lane

The following tribute has been written by Councillor Peter Kemp:

Frank, one of the kindest most generous and helpful people to have lived in Aldington.

His family have lived at Poulton Manor Farm for approximately 100 years. He and his elder brother Eric ran a dairy there for many years. The dairy was like everything else at Poulton, calm and laid back, everything done at the same steady pace.

He played cricket and football for the local teams and was a prolific gardener, along with his wife Jean, selling excess fruit, vegetables and flowers at the farm gate, always making generous donations to the Hospice.

He was a retained fireman at Aldington for 29 years, leaving 3 months before his 30 years as he had to retire at 55. He helped organise fund raisers for the  Fire Service Benevolent fund with American suppers, dances and jumble sales.

When the village held a carnival the fire brigade entered afloat depicting Toy Town. Frank was dressed as Louby Lou and looked very fetching in his long pink dress with yellow pigtails in his hair. It was typical of the man to join in whole heartedly.

Everyone will have their own happy memories of Frank, a true gentleman.

He leaves his wife Jean, son John and stepdaughter Jackie to whom the Parish Council send their deepest sympathy and regards.

It’s been tricky – but the Team have continued to work towards  developing our Neighbourhood Plan.  Your responses to Questionnaire 1 have shaped the Vision and Objectives of the draft Plan – which are revealed in the new website section and will be discussed in two online workshops that we will run next week.

The digital format has come into it’s own over the last year as in-person meetings have been impossible.  Some parishes have found that being able to listen to, or join in, discussions from home has increased public participation in events that they have run.  This is a first for Aldington & Bonnington Parish Council!  We hope that it will make this workshop more accessible and encourage younger people to have their say too.  A more conventional ‘exhibition’ type event will run later in the year.

In the mean time – please do email the Clerk ( clerk@abpc.org.uk ) for the Zoom link, stating which time suits you best. ( or call/message Cllr. Linda Harman on 07802 776779) Hope to see you on Wednesday! 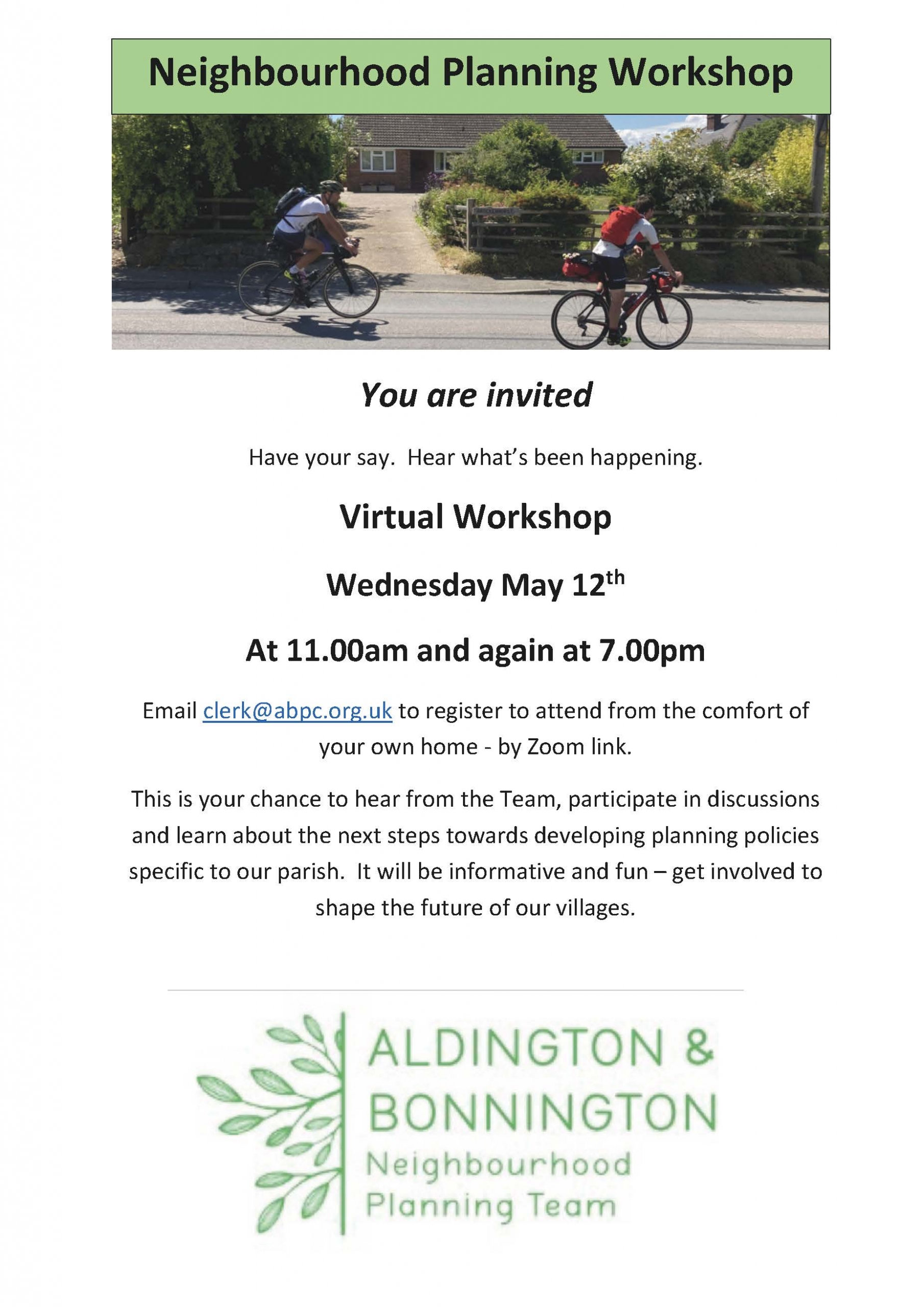 Parish News for April/ May now out.  Printed copies can be picked up in Aldington Post Office or Aldington Fresh Foods.

Due to being in a period of national mourning all public meetings are suspended until after the funeral of the Duke of Edinburgh.

The next virtual Aldington and Bonnington Parish Council meeting will be therefore be held on Wednesday 5th May at 7.30pm.

As always, any concerns can be sent by email to clerk@abpc.org.uk 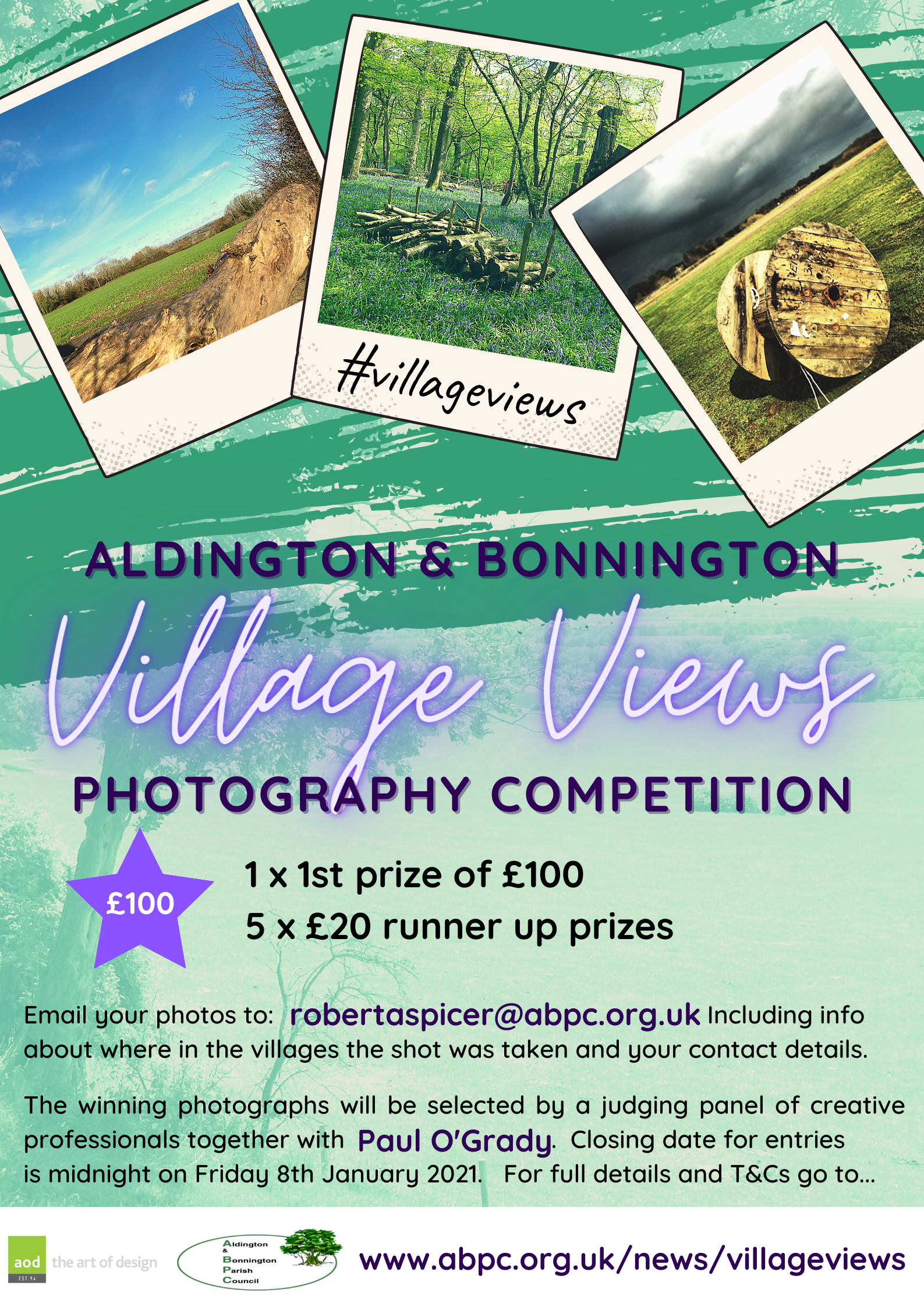 The location of Aldington and Bonnington, being just above the Romney Marshes and, in the case of Aldington, upon a ‘hurst’ (or hill) means that we all enjoy some spectacular views. 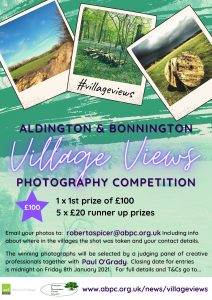 We are seeking to document those views so that they can be recorded as part of the character of our area – and to have a bit of fun whilst doing it, we are launching the Village Views Photography Competition. There is  £100 first prize to be won and 5 runner-up prizes of £20. The best photograph will be selected by a judging panel of creative professionals together with Paul O’Grady.

So – whilst out walking to disperse those Lockdown (2) blues… do make sure you have your mobile phone or a camera to hand to enter your Village View into our photography competition.  Email your photos to; robertaspicer@abpc.org.uk along with details about where the shot was taken and your contact details. If your phone has a compass take a note after you’ve taken the image of the map coordinates.  Don’t worry if you don’t have this facility though; we will work it out!

Looking forward to seeing all your lovely photographs and hoping for some autumnal sunshine to make our parish glow.

Sadly, for the first time in history, Services of Remembrance nationally will be closed the public, in line with the Government’s latest advice.  This means that the Remembrance Sunday event at the Aldington, Bonnington & Hurst War Memorial will be much reduced this year, in order to comply with national guidelines and to keep everyone safe. 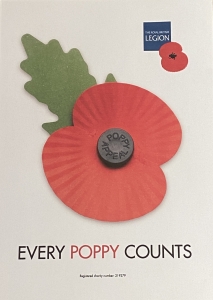 Instead, members of the public are urged to remember all those who paid the ultimate sacrifice, our veterans and all our Armed Forces by coming together for a national moment of silence at 11am on the doorstep of their own homes. The service from the Cenotaph will be broadcast nationwide on BBC One, Sky and ITV.

At our own Memorial, after the two minute silence is observed, the Last Post will be sounded and wreaths will be laid by an invited group, observing strict social distancing measures.

You are invited to show your support by replicating the Clap for Carers at the end of The Last Post.

It would also be nice to join in the national suggestion of using our windows  to display support for the War Veterans and Armed Services.  We invite everyone to show their respects by displaying a poppy in your window and by joining in the one minute silence at 11.00am, Sunday 8th November on your doorstep, alongside your neighbours.

Aldington Churches Together will lead our Remembrance Day ceremony as follows:

Fittingly, in time for Remembrance Day, commemoration of the 49 men and one woman honoured on the Aldington, Bonnington & Hurst War Memorial is now online – in a new section of the Parish Council website that is launched today. The phenomenal dedication of David Hughes has not only brought us the Memorial itself, but also, through his research, the stories behind each individual. The poignant history of enlistment, the Great War and Second World War battles and the tragedies that local families endured is told here. 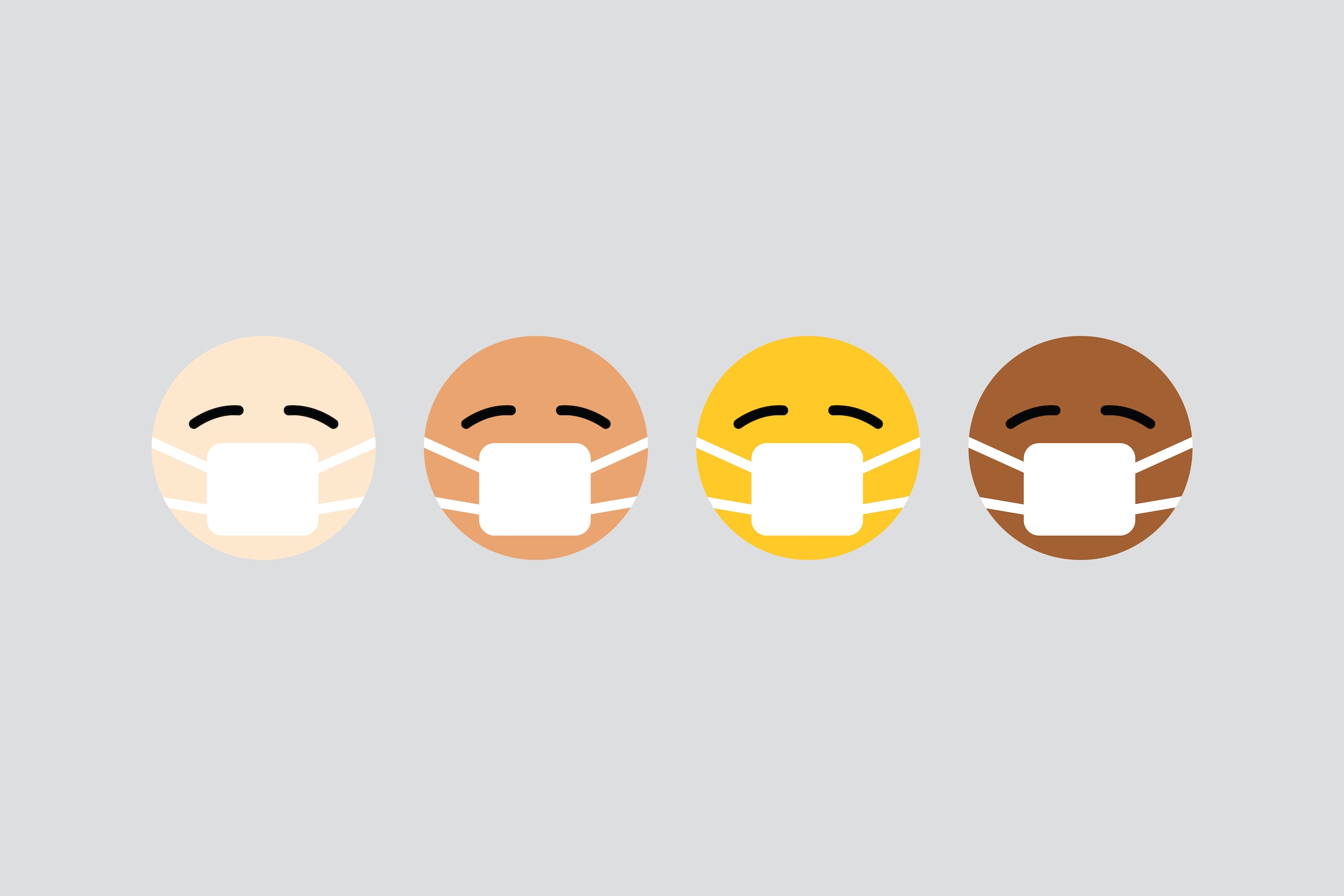 If you need help during lockdown, or in order to self-isolate;

Further helpful information and links to more on our COVID-19 Support page :https://abpc.org.uk/covid-19-support/